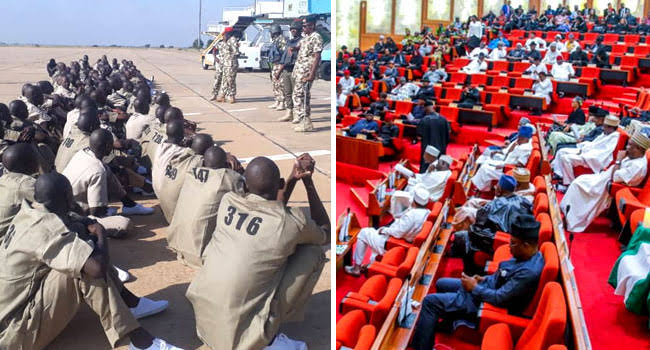 Nigerian Senate on Thursday introduced a bill to establish an agency for repentant Boko Haram insurgents.

It seeks to put in place a legal framework that would have Amnesty for Boko Haram insurgents that have engaged in massive killings and wanton destruction of property especially in the North East geo- political zone of the country.

Senator Geidam said the Bill is aimed at providing avenue for rehabilitating, de-radicalizing, educating and reintegrating the defectors, repentant and detained members of the insurgent group Boko Haram to make the useful members of the society.

He said that the Agency will also provide avenue for reconciliation and promote national security.

The agency is also aimed at providing an-open-door and encouragement for other members of the group who are still engaged in the insurgency to abandon the group especially in the face of the military pressure.

It will also give the government an opportunity to derive insider-information about the insurgence group for greater understanding of the group and its inner workings.

The Senator said that it will help disintegrate the violent and poisonous ideology that the group spreads as the program will enable some convicted or suspected terrorists to express remorse over their actions, repent and recant their Violent ideology and re-enter mainstream politics, religion and society.

If the bill is passed, the agency would provide recreational sports and fine arts programs, adding, “Also, through maintaining open lines of communication, the agency will be able to gain a greater understanding of both the immediate needs for combating Boko Hararn as well as tool for counter-radicalization in the future.”

Senator Gaidam said the bill will give the detainees Opportunities to learn carpentry, clay shaping, pottery and the like. In addition, they will make use of art through drawings, guided by professional art therapists in their art rehabilitation.

The bill is coming amidst outrage that Borno State government and the military recently released over 1,400 repentant Boko Haram suspects back into the society.