Nigerian soldiers have burnt many houses and allegedly killed an undisclosed number of youths during an invasion at Isingwu, a hamlet in Imama Village, Mgbowo in Awgu Local Government Area of Enugu State. 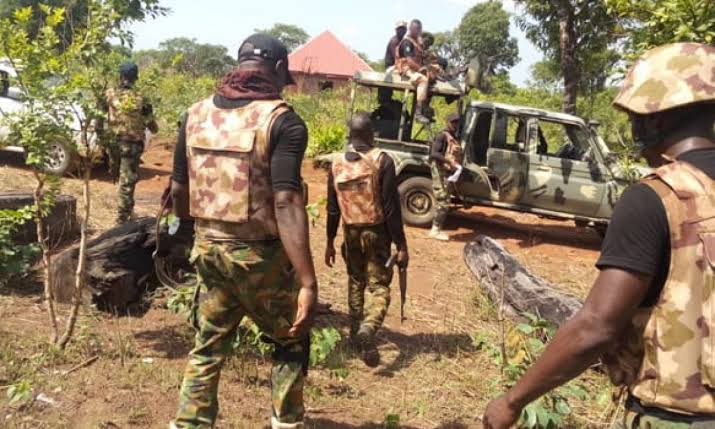 According to Punch, some residents said that the soldiers invaded the community on Monday morning in search of an alleged leader of the Eastern Security Network (ESN) the security arm of the Indigenous People of Biafra (IPOB), who hailed from the community.

A source said that the said suspect, known as Chocho, was not around when the soldiers invaded the community at about 5am and started shooting indiscriminately, burning houses including the family house of the said suspect.

He said, “They torched his house and sprayed bullets in nearby compounds. In short, the soldiers who were chanting jihadist songs were burning properties in the community like they were at war with the community.”

READ:  Cross River Policeman Starves And Tortures His Daughter After Accusing Her Of Being A Witch

Although an eyewitness, who pleaded not to be named, said there was no casualty during the attack, there are reports that undisclosed number of youths were killed during the invasion.

The source said, “The villagers were surprised at the invasion because there had not been any attack by ESN members in recent time. We have not had any issue with IPOB or its security wing ESN.

“In short, it is the ESN that stopped herdsmen kidnappings, killings and rape of women in the community and around Awgu council area. Where were the soldiers when the Fulani herdsmen were ruining the community before emergency of the ESN?”

He noted that before the Monday invasion the military had engaged in show of strength, parading the entire town everyday. This development, he said, made the people to live in fear.

A coalition of South-East Youth Leaders has condemned “the gruesome killing of innocent civilians and burning of their houses and properties by soldiers in the South East” describing it as “wicked, villainous and barbaric.”

The group said the military had no constitutional right to move into a civilian community to kill and burn houses, describing the actions as a genocide.

“The Military under the democratic setting is governed by constitutional norms. The Nigerian Constitution being the grand norm, absolutely prohibits the use of extra legal killings of citizens under section 33 (1).

“What on earth will make soldiers who are paid with taxpayers money to invade a civilian community killing anything on sight and burning down houses if not to conquer the territory.

“The plot to Fulanise and Islamise Nigeria is no longer a hinder agenda but an open one now. The Awgu genocide is a clear one for all to see.

“The soldiers who came for the mission in Awgu were killing people and speaking Fulani and Hausa language. They were carefully handpicked by their sponsors for the wicked genocide mission.

“We are very aware that the plot to annihilate Ndigbo for the Fulanis to take over Igboland is because the South East region are predominantly Christians.

“It is so sad that such genocide is happening in a supposed democratic administration were the rule of law, right to life and fundamental human rights are meant to be respected by the government.

“Awgu is a peaceful and law-abiding community. The community has not been in the news for the wrong reasons. For the Nigerian military to move into a peaceful and and law-abiding community to kill innocent people while abusing those they are killing with Fulani and Hausa language means that there is more than meets the eye. Truly Igboland has been marked for take over by the Fulani using the Nigeria military but they will not succeed.

“We call on the South-East governors who are the Chief Security Officers of their various states to stand up on their feet and defend their states. If they keep quiet believing that they are secured because they have security around them, very soon the Fulani killers will get to them. The time to address and arrest the situation in the bud is now.”

“The youth leaders however, called on the United Nations and the international community to immediately come to the aid of the people of South-East who have been marked for annihilation because they are Christians.

“We hereby demand for an independent panel of inquiry into the genocide committed by Nigerian soldiers in Isi-Ngwu community and the massive destruction of houses. The soldiers that carried out the burning and killings must be fished out and tried for committing war crime against the people.”

READ:  Oshiomhole Is Killing APC And Chasing People Out With His "Agbero Style" - Former APC Chairman

Another Storey Building Under Construction Collapses After Rainfall In Lekki [Photo]