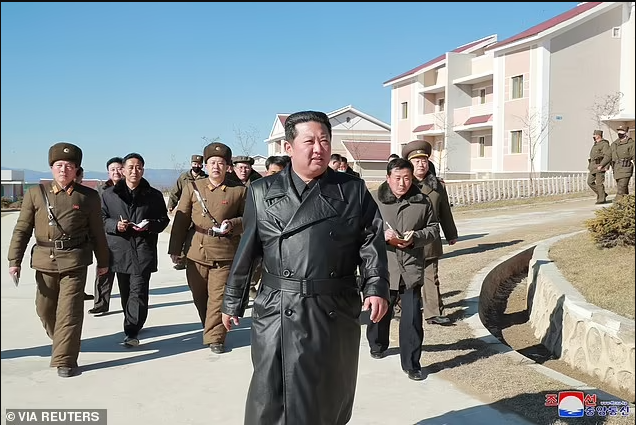 Jong-un first appeared in the leather coat in December 2019, around the time he was negotiating with Donald Trump over North Korea’s nuclear stockpile.

A resident of Pyongsong said the coats have been popularised by Jong-un himself, as well as other leading figures such as his sister, Kim Yo-jong, who has been spotted wearing one.

The coat has since become a symbol of power among the North Korean elite who were keen to show their loyalty to the Supreme Leader and who could afford real leather.

It was gathered that the real leather coats imported from China were worn by rich people who could afford them, but soon garment makers began to import fake leather to make them domestically.

READ:  World Leaders Condemn Russia's Attack On Ukraine As Over 40 People Are Killed

The source who pleaded anonymous told Radio Free Asia: “Now the leather coat has become a symbol for powerful women too.

“As leather coats began to be recognised as a symbol of power, private clothing merchants asked trading company officials to import synthetic leather since September of this year.

“They copied the design of the leather coats worn by the Highest Dignity and the officials and now they are being sold in the marketplace.”

To put a stop to the cheap imitations, fashion police have been deployed to shut down merchants selling leather trench coats and take them off people amid fears “it cheapens Kim’s look and undermines his authority.”

They instructed the public not to wear leather coats, because it is part of the party’s directive to decide who can wear them,” a source told Radio Free Asia.

The outlet said knock-off versions of the coat first began appearing in September this year when unofficial trade between China and North Korea was reopened following a shut-down during the Covid pandemic.

But Leather jackets have actually been a popular fashion choice in North Korea since the early 2000s, when they became popular from smuggled South Korean films that were in circulation.

KanyiDaily had also reported how Kim Jong-Un ‘ordered 33 people to be executed because they made contact with a Christian missionary.