The family of a National Youth Service Corps (NYSC) member, Remi, who proposed to a female soldier, Private Sofiyat Akinlabi, has apologized to the Nigerian Army. 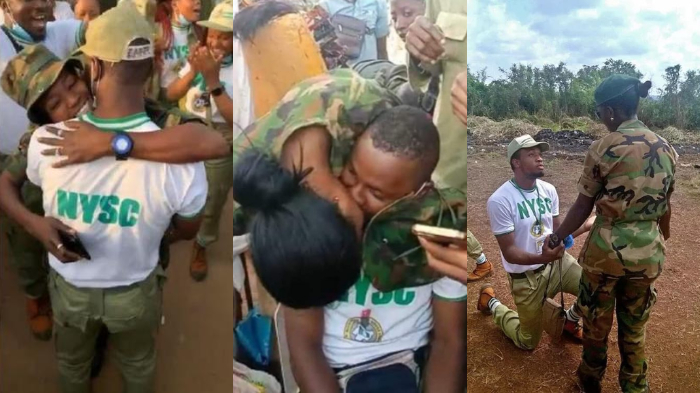 KanyiDaily had reported how the corps member proposed marriage to the female soldier during the orientation exercise at the NYSC camp in Yikpata, Kwara State.

The development led to the arrested of the female officer who was accused of violating military laws by getting involved in a public display of an amorous relationship with a paramilitary trainee – a corps member.

The Army explained that the female soldier’s action amounted to taking advantage of her trainee, noting that she would be punished in line with extant military laws.

Speaking with Punch on the condition of anonymity because of the nature of the matter, the family of the corps member appealed to military authorities not to dismiss the romantic soldier.

READ:  FUTA Finally Expels Six Students Who Ganged Up To Brutalize A Colleague In Viral Video

The family member disclosed that Remi and Akinlabi started their friendship in Abeokuta, Ogun State three years ago before the latter joined the military. But they lost each other’s contact, and fate brought them together at the NYSC camp last November.

The source said, “We appeal to the Nigerian Army to tamper justice with mercy and release her. She is a woman and she has emotions. We don’t want her to be dismissed; we want her to continue her job in the military.

“They have known each other before they got to camp. They met in Abeokuta over three years ago before she joined the Army but lost contact some time ago. Meeting at NYSC camp was like a reunion.

“They have been friends all along and Remi thought it wise to seize the opportunity of their meeting again to propose to her. He had to walk up to her as a man and not worry about her new status as a soldier because she would eventually get married.”

“He got the courage and proposed to her out with a ring which she accepted. The whole thing was totally a surprise to her.

“It happened after the passing out parade on December 14, 2021. She was at the Mammy Market pressing her phone, she was just on her own and she never knew something of such would happen.

“When he walked up to her, she was over joyous and dumfounded at the same time. She is a lady and her reactions were triggered by emotions. Like men, women are still emotional beings no matter who they are.

“He can’t explain his love for her because they so connected emotionally when they met again and he believes it is true love,” the source said.

Meanwhile, two petitions on Change.org platform by activists Deji Adeyanju of Concerned Nigerians and Omoyele Sowore of Revolution Now have attracted over 10,000 signatures.

The petitioners shared photos of male soldiers proposing to their love interests in uniform on Facebook and called for the release of Akinlabi.

KanyiDaily had also reported how the Nigerian Army dismissed a female soldier for getting pregnant after she was allegedly raped by five suspected bandits while traveling to Oyo State.