Popular Nigerian singer, Burna Boy has gifted the sum of $3,000 to an upcoming singer named Hyzah who held and kissed his feet for blessings in a viral video. 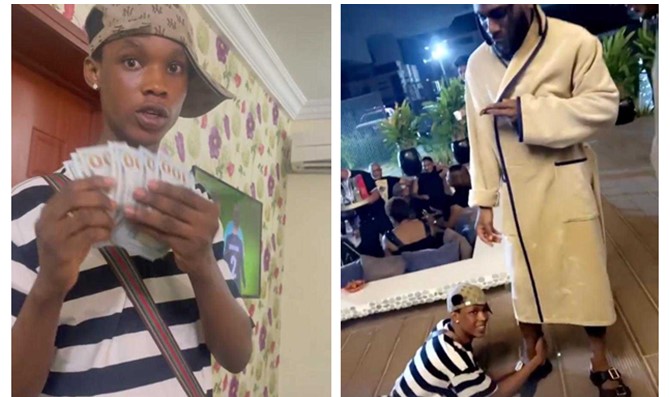 In the viral video, Burna Boy could be seen walking in a bathrobe at an event in Lagos when Hyzah swiftly moved towards him and laid down on the floor to greet the Grammy winner.

Burna Boy and the people around him were telling him to stand up, but he instead chose to grip the singer’s feet and then kissed it as he pleaded for a blessing.

The Grammy winner was also seen in the studio with Hyzah who revealed in a video shared on his Instagram page that Burna Boy blessed him with $3,000.

Sharing the video, Hyzah appreciated Burna for the kind gesture saying, “What a way to start a new year. I met the African Giant and got his blessings. More greatness Odogwu.”

KanyiDaily recalls that Burna Boy recently admitted that he had inflicted pain on people in the past, vowing that he will dedicate the remaining days of his life to bring joy to others no matter the circumstance.