A former Senator, Ben Murray-Bruce has condemned the increasing trend of ritual killings among Nigerian youths, noting that such action would not make them rich overnight. In a video shared on his Twitter page on Sunday, the ex-senator said young people who are supposed to be the “leaders of tomorrow now engage in unimaginable crimes just to become millionaires overnight”.

“What has suddenly gone wrong with young people who now believe that rituals involving human blood will make them rich?”.

“So many Nigerians go missing daily, and while many are never found. Some are found dead with body parts missing. We must work to stop this trend.”

The former senator said the “narrative that poverty and unemployment get young people into ritual killings” must not be accepted.

READ:  Man In China Dies On A Bus After Testing Positive For Hantavirus, Other Passengers Tested

To curb the menace, Murray-Bruce said the family, as a social institution, should instil discipline and good morals in children.

He said, “We must return to our traditional family values where charity begins at home. The family remains where the teachings of ethics begin.

“This is where moral instructions are imbibed in children. This is where discipline and good morals are instilled in children regardless of their religion. We must rebuild our families and inculcate love and tolerance among our children.”

The former senator also admonished that the government “must do more to encourage young people to use their knowledge of technology for productive ventures”.

He said, “With this, I’m calling on the government to establish tech hubs and tech sharks to train young people in information and digital skills aimed at making Nigeria and the world a better place. We must teach them good virtues, hard work and patience.

“I want young people to know that there is no shortcut to being wealthy without hard work. Killing a human being for ritual purposes will not make you rich overnight. It will only take you to hell.

“Our politicians and elites must show restrain in the way they flaunt their wealth both publicly and on social media.

“The Nigeria police and other security agencies should also deploy intelligence and apprehend the perpetrators of these acts and bring them to justice.

“While our worship centres must focus more on encouraging young people to embrace hard work diligence and patience.”

READ:  Boko Haram: 12-Year-Old Female Suicide Bomber Blow Up Herself And 3 Other Boys In Borno

What could have gone wrong with our young people? pic.twitter.com/Rz6AqZkE5x

KanyiDaily recalls that the Oluwo of Iwoland, Oba Abdulrosheed Adewale Akanbi had called on the Federal Government to approve death penalty for ritualists in the country. 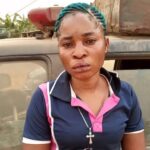