Former heavyweight boxing champion, Vitali Klitschko said he would take up arms alongside his brother and fellow Hall of Famer, Wladimir Klitschko to fight the Russian invasion of their country, Ukraine.

Klitschko Brothers To Fight For Ukraine Against Russia

Speaking with Good Morning Britain, Vitali, 50, who is also the mayor of the capital city of Kyiv, said he would fight for his country. because Ukraine is already in a “bloody war” and he doesn’t have “another choice.”

The 50-year-old politician, known as “Dr. Ironfist” during his fighting days, said, “I have to do that…I would be fighting,” while calling on the country’s minister of defense for civilians over the age of 18 to take up arms to help defend the country.

'I don't have another choice. I have to do that.'

The Mayor of Kyiv @Vitaliy_Klychko tells @richardgaisford that it is 'already a bloody war' and he is prepared to fight for his country. pic.twitter.com/KvoGP5f92C

The 6-foot-7-inch politician, known for his powerful punches, said Kyiv was under threat and the main priority was to work with police and military forces to support critical infrastructure, including the delivery of electricity, gas and water for its citizens.

“Shots and explosions are ringing out in some neighborhoods saboteurs have already entered Kyiv. The enemy wants to put the capital on its knees and destroy us,” he said in a news briefing as Russian troops got closer to the center of the city.

Vitali’s brother, Wladimir Klitschko, a former heavyweight champion, had enlisted in Ukraine’s reserve army earlier this month, saying that the love for his country compelled him to defend it.

He wrote, “Putin makes it clear that he wants to destroy the Ukrainian state and the sovereignty of its people, Words are followed by missiles and tanks. Destruction and death come upon us. That’s it, blood will mix with tears. We will defend ourselves with all our might and fight for freedom and democracy.

“The Ukrainian people are strong. And it will remain true to itself in this terrible ordeal. A people longing for sovereignty and peace. A people who consider the Russian people their brothers. It knows that they basically do not want this war.

READ:  American Man Flies Down To Enugu To Wed His Nigerian Bride Whom He Meet On Social Media [Photos]

“The Ukrainian people have chosen democracy. But Democracy is a fragile regime. Democracy cannot defend itself; it needs the will of the citizens, the commitment of everyone. Basically, there is no democracy without democrats.”

Wladimir added: “I’m calling to all international partners to observe this tragedy that is happening nowadays in Ukraine.And this senseless war that is not going to have any winners, but losers.

“I just want to tell you we must stay united against this aggression, against Russian aggression. Don’t let it continue happening in Ukraine, don’t let it happen in Europe and eventually in the world. United we are strong, support Ukraine, thank you.”

Vitali and Wladimir had successful runs as boxers and entered the Guinness World Records with the most heavyweight boxing titles held by brothers. Both Klitschko brothers also hold doctorates and speak multiple languages. 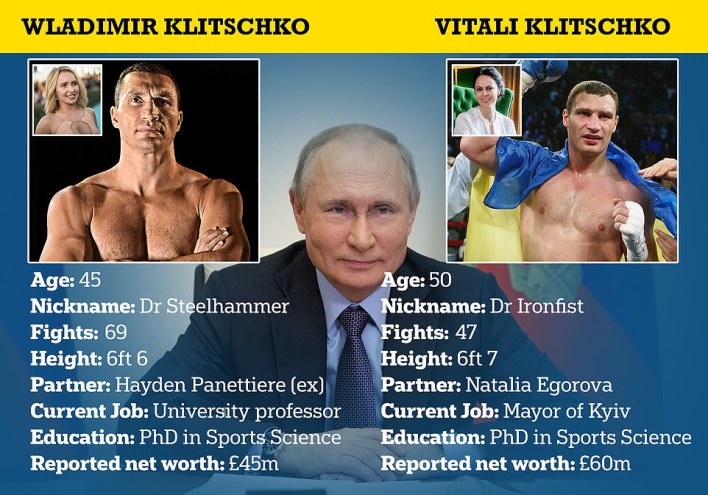