The Founder of Household of God Church, Pastor Chris Okotie, has called on the presidential candidates of the leading political parties should allow him to succeed President Muhammadu Buhari. 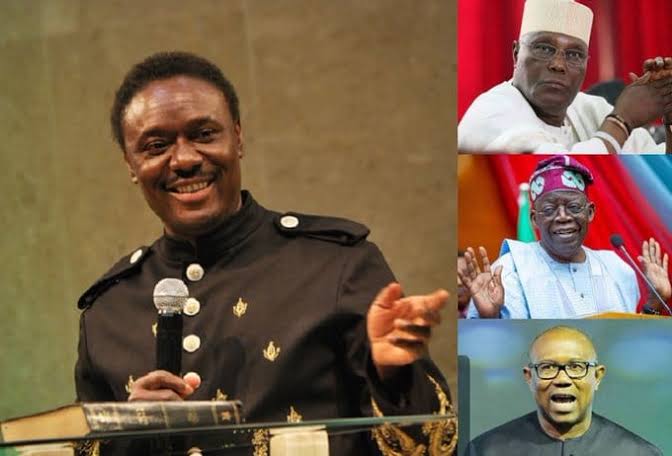 Speaking with reporters on Sunday, Okotie urged the presidential candidate of the All Progressives Congress (APC), Bola Tinubu and the flagbearer of the Labour Party (LP), Peter Obi to drop their presidential bids and support him to head an interim government.

Okotie said, “I want to appeal to all presidential candidates to withdraw from the race and allow me to come in as the interim president.

“I want to implore Asiwaju to support my government for the betterment of the country and I also want to tell Obi that the system that introduced him cannot take him anywhere, because he cannot operate in the system we have now. All the presidential candidates should support me to succeed President Buhari as the interim president.

“We must also rise above tribe and religion because there is an imbalance in the country and we are not practising federalism instead, what we are practising is a presidential system of government.

“Since 1999, things have been declining because the presidential system of government we are practising has failed us.

“We must get rid of the national and state assemblies because maintaining each member costs the country billions of naira. Some of the standing committees at both assemblies are not useful to the country, they are only representing themselves, not the populace.

“The most important of all is our constitution. It should be changed to a people-oriented constitution, not the military one we have now. After the change, we can then restructure the country for the better.”

Okotie said his interim government would be about national reconciliation and reconstruction.

“The interim government shall address aberrations and anomalies in the polity,” he said.

“I want to implore all Nigerians to join hands in the conversations that would enable a transition to an interim government at the end of President Buhari’s administration.”

B6ola Tinubu had revealed that he resorted to prayers when he knew there was a gang-up against his presidential bid, stressing

READ:  Jairus Musumba Jumps Through His Office Window To Escape Arrest Over Corruption