The Catholic Diocese of Enugu has disowned the political utterances made by the founder of Adoration Ministry Enugu, Rev. Father Ejike Mbaka, against the presidential candidate of the Labour Party, Peter Obi. 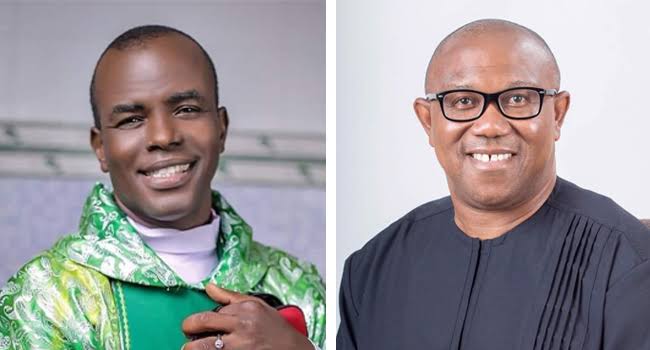 KanyiDaily recalls that while addressing his worshippers in Enugu, the priest had declared that the former Anambra governor cannot be Nigeria’s President because he is a stingy man who refused to donate to the church.

The priest said many abusive things about the presidential candidate which drew public anger on him in the social media.

Reacting in a statement on Thursday, the Auxiliary Bishop of Enugu, Rev Ernest Obodo condemned and dissociated the church from the comments.

The statement reads, “The attention of the Diocesan Bishop, Most Rev. Callistus V.C. Onaga, and the Catholic Diocese of Enugu has been drawn to inflammatory political utterances by Rev. Fr. Camillus Ejike Mbaka, the Director of Catholic Adoration Ministry Chaplaincy Enugu, on Wednesday, 15 June 2022 during his Wednesday Adoration Programme.

“Fr. Mbaka during his preaching attacked the good reputation of Mr. Peter Obi, the Labour Party Presidential Candidate, describing him as “a stingy man” and as “a joker”, contrary to canon 220 of the 1983 Code of Canon Law which prohibits anyone from illegitimately harming the good name of a person.

“He also made fun of the Labour Party and vowed that Mr. Obi could not be the president of Nigeria. This is a clear violation of the provisions of canon 287 (2) which forbids priests from engaging in partisan politics.

“The Catholic Diocese of Enugu hereby condemns and dissociates herself from such unbecoming and divisive utterances from Fr. Mbaka.

“We notify the general public that Fr. Mbaka’s views on the matter are entirely personal to him and do not represent the position of the Catholic Diocese of Enugu.

“In an effort to keep him united to the Body of Christ, we enjoin him to refrain from making further provocative prophecies or utterances capable of heating up the polity. We assure the people of God and the general public that the Catholic Diocese of Enugu is taking the due canonical process.

“Finally, we urge all the People of God to continue to pray for peaceful elections and to discharge their civic responsibilities by getting their Permanent Voter’s Card and casting their votes in order to elect the right candidates. May Our Lady, Queen of Nigeria, intercede for us.”

Meanwhile, Bianca Ojukwu has reacted the supposed ‘stinginess’ of Peter Obi, narrating how he gave $3,800 to charity instead of buying designer suit in United States.

Bianca Ojukwu Speaks On Peter Obi’s Supposed Stinginess, Recounts Her Experience With Him