Kogi State Governor and presidential hopeful, Yahaya Bello has stormed out from a meeting of Northern Governors of the All Progressives Congress (APC) with President Muhammadu Buhari. 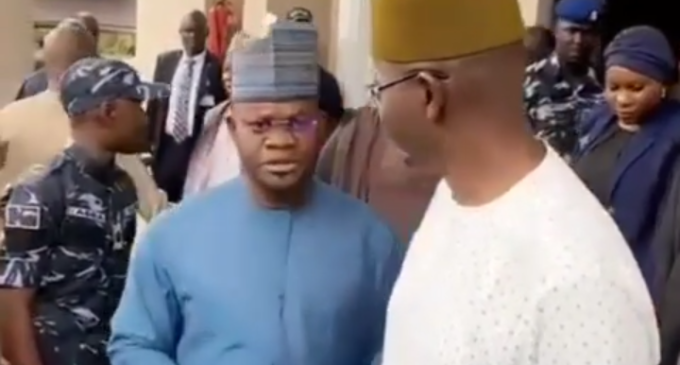 It was gathered that the governor, who is also a presidential hopeful, rejected the decision by his colleagues on zoning the APC presidential ticket to the south.

In a video, Bello is seen walking out of a building, while Nasarawa governor, Abdullahi Sule appears to be trying to calm him down, with Borno governor, Babagana Zulum, also coming out of the building shortly afterwards.

The video of the Kogi governor’s action surfaced shortly after the northern APC governors met with President Buhari on their decision to ask the APC to zone its presidential ticket to the south.

Speaking on why Bello was not at the meeting, Kaduna State Governor, Nasir El-Rufai said the presidential hopeful was against the governors’ decision on zoning the presidential ticket to the south.

READ:  I Will Never Keep Quite If My Child Is Kidnapped, I'll Go And Lock Aso Rock – Sheikh Gumi

El-Rufai said Bello decided “excused himself” from the meeting after 13 of the 19 APC governors from the north agreed that the party’s presidential ticket be zoned to the south.

He said, “The governor of Kogi state chose to excuse himself from meeting with Mr. President because he believes that he does not agree with our position.

“There are 14 APC governors out of the 19 northern states. Thirteen of us are on one page on this subject and we all came to see the president. But the governor of Kogi state excused himself, and it is within his democratic rights to excuse himself.”

In his remarks, Atiku Bagudu, chairman of the progressive governors’ forum (PGF), said it will be in the interest of peace to zone the presidential ticket to the south.

READ:  "We're Begging You To Consider South-East For Position Of SGF" - Igbo Group Appeals To Buhari

Meanwhile, the APC National Working Committee has countered the position of Abdullahi Adamu, chairman of the party, who adopted the Senate President, Ahmad Lawan as the consensus presidential candidate of the party.

Related Topics:apcNewsPoliticsPresidencyVideoYahaya Bello
Up Next