Fast-rising Nigerian singer, Portable has come under heavy fire after he was spotted sitting on the statue of Chief Obafemi Awolowo during the mega rally of the All Progressives Congress in Osun State.

Portable Strips On Awolowo’s Statue At APC Rally In Osun

KanyiDaily recalls that Portable recently revealed that the ruling APC paid him a lot of money to support the party’s presidential candidate, Bola Tinubu, and re-election of Osun State Governor, Gboyega Oyetola.

In a recent photos circulating on social media, Portable could be seen stripped off his shorts and clothes while holding the symbol of APC, ‘the broom’ beside Awolowo’s statue in Osun.

The photos generated outrage among social media users, with some expressing displeasure at the singer, while others claim APC would regret calling Portable for the rally.

Oh the great Awolowo will be turning in his grave. This is how disrespectful APC is. pic.twitter.com/80KGIh3nA7

This has always been where Bola Tinubu wanted to keep the great sage Papa Obafemi Awolowo; disrespected and forgotten. He wants to be the only cock that crows in Yorubaland. But there's no basis for comparison of a mere cockerel with a bald-headed eagle. pic.twitter.com/MdUuPM96JU

But how does this even help APC? This vulgar display on someone of such historical significance as Chief Obafemi Awolowo will even turn people against the party. What is this? No Northerner will do this to a statue of Ahmadu Bello! Why are we like this?#TableShaker pic.twitter.com/7z6uIAojui

You can literally see the disgust on Obafemi Awolowo's face with the flag of a failed party pinned on his statue's head and #Portable aka zazu almost rubbing his bumbum on his nose.

No respect or regard even for heroes passed.

Thank God Baba Awolowo is can see this directly, he doesn't have to be told what Tinubu has turned the youths and Yoruba race into.

A photo that eerily describes exactly what Tinubu has done in the Southwest.

I think the upheavals we have now are a blessing in disguise.

We now have the best chance to make Nigeria what Awolowo and others felt it should be.

A Federation with strong states and a weak Center. pic.twitter.com/SKFNJ6z88t

Awolowo was one of Nigeria’s top revolutionaries who played a key role in the struggle for Nigerian Independence. Born 6 March 1909, Obafemi Awo was a son of a Yoruba farmer, a native of Ogun State, a Journalist and a lawyer.

But! See what this riffraff is doing to His picture. pic.twitter.com/WutgA2jtPK

READ:  Nigerian Man Marries Young Lady Who Approached Him While Selling Oranges As A Child [Photos] 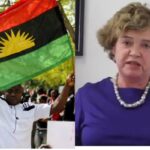 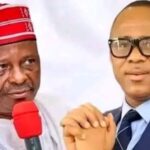