Overzealous operatives attached to the Minister of State for the Federal Capital Territory, Ramatu Tijani Aliyu, attacked a journalist and the security details at the national secretariat of the ruling All Progressives Congress (APC) in Abuja. According to Punch, the incident happened after Tijani, who earlier arrived for a meeting, was driving out of the APC headquarters amid a heavy blaring of sirens by her security aides.

It was gathered that trouble started when a security detail to the minister slapped the chief security officer manning the main gate of the APC secretariat for not being quick enough to order his ‘boys’ to open the gate after seeing Tijani step out of the premises.

The action infuriated other police officers and security men at the Secretariat, who rose to challenge the aggressor as the minister kept mum inside her car.

Rather than tender an apology for the assault, the remaining aides of the minister threatened to open fire if the aggrieved police officers fail to retreat.

The war of words, which soon degenerated into a free-for-all, caused a traffic gridlock that started from the party Secretariat to Blantyre Street, leaving motorists stranded.

In the midst of the chaos, an NTA journalist, Mohammed Baba, who was assigned to cover events at the APC secretariat was caught in the crossfire between the opposing sides.

Despite identifying himself as a broadcast journalist, he was seriously manhandled and left in tatters by the security aides who brutalized him for having the gut to record the chaos.

However, further attempts to seize his phone and camera were rebuffed by members of the APC press corp and other security men at the gate.

READ:  Wife Forced Cheating Husband To Get Her Name Tattooed On His Crotch As Punishment

While the drama lasted, the minister sat comfortably in the car and watched as her security details tore down the secretariat as if anybody had the effrontery to challenge them again.

But when she observed other journalists have started finding their way to the scene, Tijani beckoned to the operatives to return to the convoy before they finally drove out recklessly, scaring onlookers and passersby in the process.

Efforts to get the reaction of the National Publicity Secretary, Felix Morka, on the issue proved abortive, as he has yet to answer his calls nor give clarification on the matter.

KanyiDaily had also reported how a journalist, Godfrey Chikwere was hospitalized after he was arrested by the police on the orders of Ebonyi State Governor, David Umahi. 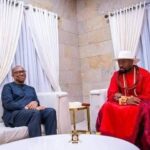