Justice Ahmad G. Mahmud of the Federal High Court, Sokoto on Wednesday convicted one Hassan Bello, a Director with the Sokoto State Commodity Board, and sentenced him to 7 years imprisonment on a one-count charge for obtaining money by false pretence. 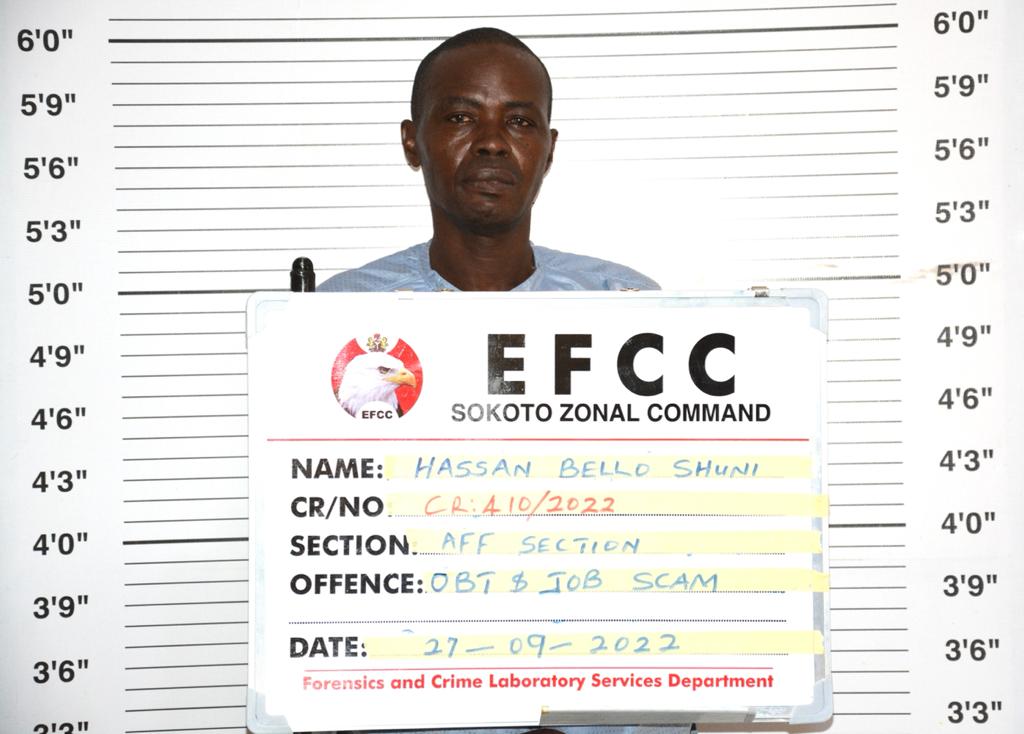 The convict fraudulently obtained the sum N1, 320,00 (One Million Three Hundred and Twenty Thousand Naira) under the guise of offering non-existent employment to hapless job seekers.

The charge reads, “That you Hassan Bello, Male, while being the Director Administration Sokoto State Commodity Board sometime in August 2021, within the jurisdiction of this Honourable Court, with intent to defraud did obtain the sum of One Million Three Hundred and Twenty Thousand Naira from one Aliyu Adamu Tsaki, Yusuf Abubakar, Yahaya Salihu Mohammed, and others in the presence of one Dahiru Muhammad when you falsely represented yourself to them that you will secure employment for them in the Sokoto State Commodity Board and issued them letters of provisional appointments, a representation you knew to be false and thereby committed an offence contrary to Section 1(1)(a) of the Advance Fee Fraud and Other Fraud Related (Offences) Act 2006 and punishable under Section 1(3) of the same Act”.

He pleaded guilty to the charge upon arraignment.

Given his plea, prosecution counsel, S.H Sa’ad prayed to the court to convict and sentence the defendant accordingly.

Justice Mahmud convicted and sentenced Bello to 7 years imprisonment with an option of N100, 000.00 fine to the Federal Government.

The Judge also ordered the convict to pay restitution of N850, 000.00 to the victims through the EFCC. Failure to pay the restitution within 6 months, the convict shall serve 2 years imprisonment.

In other news, Kanyi Daily reported that the EFCC recently arrested a man for N14 million employment scam.

READ:  20-Year-Old Man Rαpes His Boss's Wife And Two Other Women At Knifepoint In Katsina

Man Assault And Dump His Pregnant Wife, Then Move In With Woman Who Planned Their Wedding [Video]