Nollywood actor, Olaiya Igwe has stripped naked at a beach to pray for the victory of Bola Tinubu, the presidential candidate of the All Progressive Congress (APC), in the 2023 general elections. 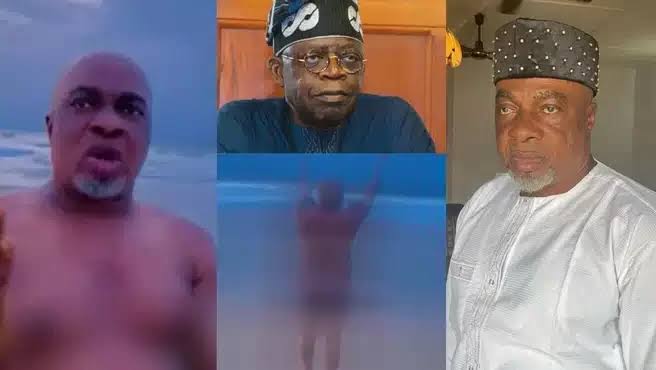 In a video shared on his Instagram page, the actor could be seen unclad while praying intensively for the former Lagos governor to wins the 2023 presidential election.

Igwe also beseeched that the Tinubu’s vote should be as much as the water of the ocean.

“God, I’m calling on you because of Bola Ahmed Tinubu,” the actor yelled in Yoruba.

“Let him win the forthcoming election, get him to the post. I internationally came to the beach to beseech you (God), the most merciful. Let Tinubu’s vote be as much as the water of the ocean. Don’t put us (APC) to shame.”

Sharing the video, Igwe argued that Tinubu is the best candidate because he “reflects our values and highest ideals”.

The actor further urged Nigerians to support Tinubu in order to protect our dreams and fight hard to keep the promise of Nigeria for the next generation..

He wrote, “It is my pleasure to support a candidate who truly reflects our values and highest ideals. There is one candidate in this election who will protect that dream.

“One leader who will fight hard to keep the promise of Nigeria for the next generation. And that’s why we must stand up and make Asiwaju Bola Ahmed Tinubu Jagaban the next president of Nigeria.”

KanyiDaily recalls that Bola Tinubu had revealed that he no longer pays attention to news on social media because he has been subjected to intense abuse by Nigerians.

READ:  "I Will Let You Know If I’m Dying" - Mr Ibu Open Up About His Ailing Health [Video]