Seven Chinese nationals, kidnapped by bandits in Niger State have been rescued by troops of the Nigerian Air Force. 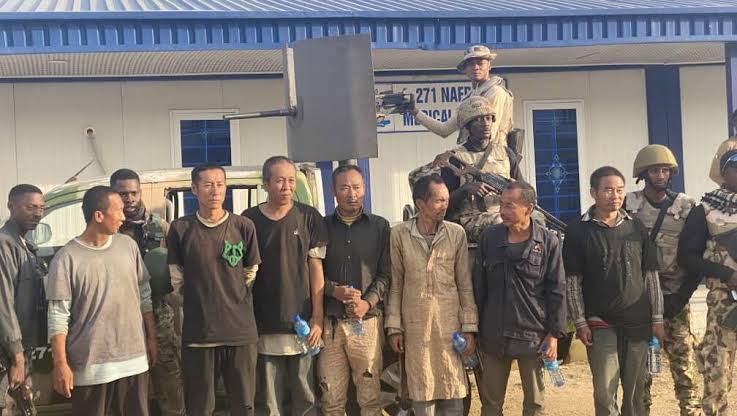 Reports say the victims are believed to have been kidnapped in June 2022 while working on a mining site in Ajata-Aboki, Gurmana ward of Shiroro Local Government Area Niger State.

This was disclosed in a statement issued on Saturday by the Director of Public Relations and Information, Nigerian Air Force, Air Commodore Edward Gabkwet.

According to the statement, the Special Forces under the 271 NAF detachment in Birnin Gwari, carried out a rescue operation in the early hours of Saturday, leading to the rescue.

READ:  House Of Reps Probe NEDC Over Mismanagement Of N100bn Which 'Vanished Under One Year'

The statement disclosed that the combat search and rescue operation, which consisted of 35 special forces, was conducted at night in the Kanfani Doka and Gwaska general areas leading to the assailants abandoning their enclaves and weapons due to the superior firepower of the special forces.

It noted further that the rescued victims were flown to the 271 NAF detachment Medical Centre for evaluation where two of them were stabilized after which they were flown to the NAF Base Medical Hospital, Kaduna for further medical investigations.

Reacting to the rescue, the Kaduna State Government commended the Nigerian Air Force for a clinical operation.

Governor Nasir El-Rufai, in a statement, expressed satisfaction with the report and commended the Chief of Air Staff as well as the Commander and men of the 271 NAF detachment for the daring operation.

In other news, Kanyi Daily reported that the presidential candidate of the Peoples Democratic Party (PDP), Atiku Abubakar has assured the people of the South-East that if elected the next president of Nigeria, his administration would end insecurity ravaging the region.

Atiku: How I Will End Insecurity In South-East