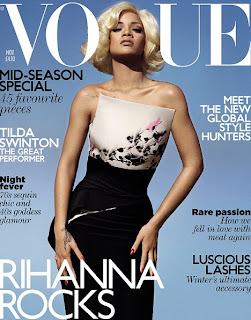 As a superstar you can expect the rough with
the smooth. And having been chased from a muddy field by an angry farmer for
posing topless on his land, Rihanna was certainly due some luck.

Today the risque R&B singer finds herself
on the cover of style bible Vogue.

In the front picture she presents an almost
sophisticated look with a Monroesque pout and blonde hair.

Inside, however, she’s back to her old tricks
– posing more provocatively and revealing every inch of her legs against some
rusty girders. She also sports a natty beret.

Rihanna has courted controversy with a series
of edgy videos – including being tied up and taped to the wall with clingfilm in
the video to her hit ‘S&M’.

But in a Vogue interview, the singer insists:
‘That’s not me. That’s a part I play. You know, like it’s a piece of art… I just
want to make music.’ The singer, born Robyn Rihanna Fenty, said that life with
her parents, Monica Braithwaite and Ronald Fenty, a former crack addict,
triggered her rebellious attitude.

‘I saw too much. I was way too mature for my
age,’ she revealed.

Last week, the singer ended up being
humiliated when farmer Alan Graham, 61, halted a racy video shoot on his land at
Bangor, County Down.