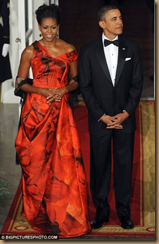 In what has been interpreted as an outdated and insulting move, a fashion blogger for the magazine’s site posted a piece about Michelle Obama’s sartorial prowess and the rise of a ‘black-geoisie’.
New York Daily News goes so far as to brand the magazine as ‘racist’, while elsewhere online, the blog has caused uproar.

Writing about the first family on the magazine’s site, Nathalie Dolivo claims that the Obamas are the catalyst for a ‘black fashion renaissance’. She suggests that America’s first black president has finally given the black community a ‘chic’ option other than ‘streetwear codes’.

She writes: ‘Michelle Obama sets the tone, focusing on cutting-edge brands … revisiting the wardrobe of Jackie O in a jazzy way.’

She believes black fashion in 2012 comprises a ‘black-geoisie’, a formula of fashion-forward black dressing that mixes ‘white codes’ – whatever they may be – with touches of African heritage, such as shells and ‘boubous’ (West African robes).

‘There is always a classic twist, with a bourgeois ethnic reference (a batik-printed turban/robe, a shell necklace, a créole de rappeur) that recalls the roots’ the writer notes, as translated by the Daily News.
That Ms Dolivo has omitted any African-American history preceding 2012 is one bone of contention, another, as Fashion Bomb Daily points out, is that she has failed to see the ‘impact’ of a host of hugely influential figures in American culture, such as the Supremes, Diana Ross, Cosby Show’s Clair Huxtable, Salt N Pepa, TLC or Aaliyah – and onwards.

State of fashion: The First Lady last night wore a striking Barbara Tfank dress to the State of the Union address

The same site notes that French Elle readers were the first to express indignation at the ‘ethnographic research’.
‘[This is] GROTESQUE, SHAMEFUL, and USELESS. White dress codes? Did I really read white dress codes..?’ writes one reader, while another adds: ‘You really think we waited until the Obamas to know style and let go of our “streetwear” proclivities?’

Comments reflect a sense of disbelief, with many bitterly sarcastic reactions. One reader asks: ‘How, in 2012, in a France where there are at least three million blacks and mixed people, can you write such nonsense? You are too kind when you write that in 2012 we have incorporated the white codes…what do you think, in 2011, we dressed in hay and burlap bags?’

Elsewhere, fashion site The Gloss writes: ‘French Elle writer Nathalie Dolivo is so happy about black people! She’s thrilled that they’ve finally learned to dress well! Yes, after generations mired in baggy pants and rap music and such, they finally have Barack and Michelle Obama to look to. Thanks, Obamas!’
Elle isn’t alone in the magazine world for making racial slurs. Italian Vogue found itself in hot water last year for writing about the trend for ‘slave’ earrings, a gaffe they said was down to a mistranslation. Many branded the traditionally fashion-forward glossy anything but.