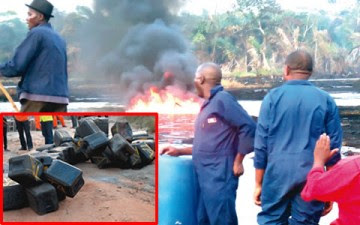 A pipeline explosion in the Arepo area of Ogun State killed about 30 people who went to siphon petroleum products from a ruptured Nigerian National Petroleum Corporation pipeline on Saturday.
It was learnt that the fire broke out after vandals started fighting over the oil. One of them was said to have fired a shot that that led to the explosion.
Operatives of the Inspector General of Police Special Task Force on Anti-Pipeline Vandalism Unit, Force Headquarters Annex, Lagos, who were on patrol were said to have gone to the scene to avert further disaster.
It was in the process that they arrested a medical doctor, Dr. Odusina Adegboyega, and one of the survivors, Sunday Reuben, on their way to the hospital.
Confirming the arrest, Assistant Commissioner of Police, Friday Ibadin, who is in charge of the task force, said the explosion started at about 2am on Saturday.
“Shortly after the explosion, policemen led by Sector Commander, Lagos, DSP Onaghise Osayande, cordoned off the area to reduce casualties while they awaited the arrival of fire fighters to quench the fire.
“It was in the process that they stumbled into a jeep carrying one of the survivors and a medical doctor who was on his way to the hospital. In the course of interrogation, we discovered that the survivor was one of those who participated in the killing of NNPC officials last year.
“The task force arrested six suspected vandals who were alleged to have participated in the incident that led to the killing of three NNPC officials at Arepo Village, Owode, Ogun State.
“Sometime in August, 2012, there was a fire outbreak which was caused by suspected vandals who burst the pipeline to siphon petroleum products at Arepo.”
The spokesperson, National Emergency Management Agency, South-West zone, Ibrahim Farinloye, confirmed the incident to our correspondent on the telephone.
Farinloye said the casualty figure could not be ascertained.
“The explosion has made the area inaccessible but we will continue rescue efforts on Sunday (today),” he said.
Also, the NSCDC Public Relations Officer of the Ogun Command, Mr. Kareem Olanrewaju, who confirmed the fire said, “No arrest was made as the vandals escaped through Majidun.”
Residents however told our correspondent that over 30 people were killed in the fire.