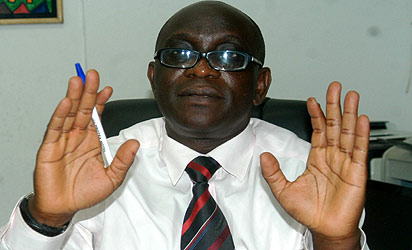 The gun-totting bandit was just some four metres from the big man. Pointing his gun at him, he barked, “bring out your money everybody” – he was actually talking to other car owners and passengers who had been abruptly forced to a screeching halt. There was pandemonium.

Everyone who was not a gang member rushed to obey the orders, spreading one another on the hot, tarred road. There was no difference between the big man, rich man; the poor, wretched, hopeless or useless – everyone had become one, bonded by the nightmare that was this gang of vicious armed robbers that confronted them..This was Lagos/Ibadan Expressway. Time was about 10:15 am.
Back to the big man! The big man knew what to do: Lay down flat on the hot, tarred road. Like every other person unlucky to be on the Ishara area of the expressway, he complied with immediate alacrity.
“Everybody bring out your money”, one of the robbers again reportedly shouted.
The big man? Gbenga Adefaye.

The grace of God is not auctioned; it is divine! The Almighty gives to those He wishes.

Murmurs had been on at the corporate headquarters of Vanguard last Monday.

And when Adefaye entered the conference hall where the Management Meeting was on, it was a huge relief for management staff of Vanguard.
“What Happened”?
“Thank God”.
“How did you survive”?
“Hope the injury was not too serious”?
Why didn’t you stay at home”?

The questions pouring forth were endless. It was a group of agitated management staff asking questions, questions that were being asked not because any ready response was expected but more because of concern and anxiety.

To all these, Adefaye appeared calm; he then said with a wry smile:
“Everybody calm down; calm down; I know you want to hear the story”, he said, as he took his seat at the head of the table.

He confessed straight away: “When I narrate what happened to me to you people, you would think it was a scene out of a home video; but I can tell you it is true; very true.
“I thank God Almighty and I think the only reason why I survived was simply because I think the Almighty God still has some assignment for me on this earth; I give Him all the thanks and I give Him all the glory” he said, bowing his head.

Although from what the eyes could see, Adefaye’s eyes were not heavy with emotional tears, it was palpable that his heart was very heavy.

Heaving a sigh of relief , as though the events were just happening, he looked with unseeing eyes into the ceiling for some 10 seconds before he began his narration – that after the preliminary explanation of how fate compelled him to drive what by his standards was a low profile car, a Honda Bullet, how he would normally choose to sit beside the driver in some instances; how he decided to wear just a pair of jeans and a sweat shirt and how he travels cash-light, relying mostly on the use of his ATM card – which some of his associates in the office consider to be a miserly attitude any way (this was to play a major role in the unfolding drama):

“I was driving from Lagos at a not-too-top speed mode when, suddenly, the vehicle in front of me, a bus, stopped and turned, losing control.
“I rammed straight into the vehicle and the passenger side of the car gave way instantly – that was where I would have been seated had my driver been the one driving. That in itself was enough for me to thank God.

“The airbag came out forcefully and that played a very vital safety role.
“By the time my car stopped, after some other cars had rammed into one another behind mine, it dawned on us that armed robbers were operating. The guys had positioned themselves at different points of the expressway between 50 to 100 metres so they could have a full view of everybody. I can not accurately give the total number but they couldn’t have been less than five.
“Then I saw death confronting me. After lying flat on the ground, one of the robbers was just four metres away from me with his AK 47. ‘Just lay down there’ he shouted; I obeyed but kept engaging him, pleading to take it easy that I would obey his orders.

“But my greatest fear was that I was traveling with just N1500 on me and from accounts of people involved in robbery incidents, when those boys ask for money and you don’t give them something reasonable, they become quite agitated and angry and they either shoot you in the leg or hit you in the head with the butt of the gun. None of these prospects was a welcome one.
“I was lying down by the edge of the road and looking down at the valley on that side of the road, I just decided that rolling down the bushy valley served a better prospect than being beaten up so I just made for it.

“It was a split decision and I rolled down the valley. I must have gone down some 25metres down when I felt a tree branch hook up the back of my sweat shirt and I got stuck; as I rolled down, the tree branches, shrubs and thorns registered bruises and incisions on my body”, he said – he came in with a bandaged hand.

Continuing, Adefaye said, “And because the robbers too were agitated, they wanted to get everything they could and run away. Luckily, the guy did not go after me because he would have left me for dead. And I think some policemen who were strategically positioned some kilometers away and who had been alerted drove to the scene of the robbery. Even before they got there the robbers had disappeared, most likely into the other side of the bush.
“By the time I was rescued from the valley and went back to my car, the robbers had taken my Blackberry and my Nokia Communicator. But all those were nothing compared to life.
“It was the fourth day of lent (Christian month of fasting) and I was on.
“The grace of God saved me”, he concluded.

It was after that that arrangements were made for how to tow the vehicle out of the area because they were warned that the robbers could still be around waiting for the policemen who had come to rescue them to go.

Indeed, the Lagos/Ibadan expressway has suddenly become an operating theatre for robbers since the declaration by the new Inspector General of Police, IGP, MD Abubakar, that all road blocks should be dismantled.

The IGP meant well because citizens had become so uncomfortable with the menace of road blocks mounted by policemen. Though they serve a security purpose, the level of extortion that goes on had become embarrassing to any right-thinking police officer.

One of the market place theories is that some bad eggs in the force may be responsible for the sudden rise in the number of robbery incidents on the highway.

Sunday Vanguard, upon investigation gathered from some of the towing vehicle operators that a little less than a decade ago when the wave of robbery incidents on the expressway became too high to bear, with some alleging that towing vehicle operators were working with the robbers, “an agreement was reached with a former Police Area Commander”, a towing operator disclosed.

“The agreement”, he said “was signed and sealed that any armed robber arrested by any means on the highway would be summarily killed. Then things began to happen as some of those who were first caught and killed happened to have links with some men of the force.
Our action slowed down the pace for the robbers. But within a month or so, the Area Commander was transferred and his replacement repudiated all the agreements and things began to get worse again”, he disclosed.

As for Adefaye, he is recovering. He is back at his desk. But he says he gives thanks to the Almighty.
The Police authorities are looking into how to re-assure citizens by bringing back the police on the streets without inconveniencing citizens. According to the new IGP, there is a need to weed the force of bad eggs. A tall order, but one which “I am determined to carry out”, the IGP declared 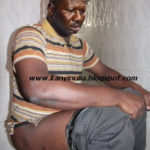