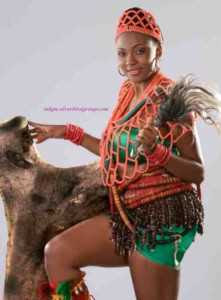 Oh, dear. The monsters of pageant rigging are rearing their ugly heads as controversy heightens to a fever pitch about the choice of Isabella Ayuk, Miss Cross River, for Most Beautiful Girl in Nigeria (MBGN) 2012. The public and other contestants alike seem to think the curvy contestant snatched the crown off another, more deserving Indian (or is it Brazilian?) weave.

It seems that the current MBGN ticks none of the boxes that the Nigerian twitteratti think a Naija beauty queen should fit, and therefore, she stole a march on the other contestants  as she waved tearfully at the crowd—ticket, N1 million and car in a firm death grip.

There were the questions about her size. While Nigerians are used to (and appreciate) a curvaceous woman, Ayuk was deemed unpleasantly plump, and not the cute-and-curvy archetype preferred in plus-sized women. Chatter on social networks asked whether she was pregnant after she strutted her stuff on the catwalk. Strike one.


Strike two was her answer to the pageant questions meant to test their grammatical prowess and intelligence. Yes, really. Her responses seemed a tad too well-rehearsed and came off as a tear-jerker ploy (about tale about losing a sister to typhoid) and not a more reasoned answer that showed off her smarts.
Then came the behaviour of the judges on event night, the third strike that sent her out of the game. According to audience members monitoring the judges (why weren’t they watching the girls strut on stage?), they seemed uninvolved in the process, hardly talking to each other and uninterested in taking notes. It seems that they were all visibly shocked and surprised at the turn of events. According to “a close source” to a judge, they actually did not grade any of the participants and they were taken aback by her victory.
Let’s not forget Miss Benue’s rumoured shrieks of outrage that echoed through the halls after Ayuk was crowned. (Those rumours have not been confirmed!)
Then stuff really hit the fan. Rumours have begun to circulate that she allegedly competed in MBGN 2004, at the age of 24, and her bio for this year lists her as 25. Time seems to have slowed down for the beauty queen.
All this seems to be a tempest in a pageant teacup. The pageant is not hunting for MENSA candidates. And if we can get a 30-year-old woman to pass for someone 5 to 7 years younger, what is the big deal? Still the integrity of the show is on the line, and I hope Silverbird and MBGN come clean with a response to the issues.
In the meantime, let’s hope that Ayuk’s Lufthansa flight to Mongolia does not end up with her banished to its Outer regions in a yurt with only the goats for company, as she tries to avoid the allegations. On the other hand, that would make a great reality TV show, unlike the uninspired mess that was the 2012 show. Better luck next year, Nigeria.