Nollywood actor Chidi Mokeme recently got married to his heartrob. (If you missed it, see the pictures HERE) The couple shared their love story. Read it below.

How did you meet?
(Chidi)
– How did we meet? We met by chance. I got to witness the inauguration
of President Obama which was one of the most memorable events of our
time. So, I said okay, I must be present.
I had gone for the inauguration ceremony at one of the town hall
meetings that was put together to celebrate him. I walked into this
place and lo and behold, she was standing right there (Laughs). I mean,
she stood out and we said our hellos and moved on and one thing led to
the other.
Continue reading……..
What
was the attraction for you? Because a lot of people could have said
the same hello or even gone ahead to ask you out and it wouldn’t have
meant anything to you?
(Jean) – We didn’t start out like he asked me out. It happened honestly by chance and I still wonder how I got in (General laughter).
So, why her? A lot of people; other pretty ladies must have been there also, so why go for her?
(Chidi)
– It must be that time and chance that we talk about that we met. We
didn’t really say oh, this is where this is going to end up, like right
now. But one thing I know for sure is that from that minute, it’s
probably been non-stop. We’ve been inseparable. So, that was ultimately
how we got there.
How long was your courtship?
(Chidi asks wife) – How long was our courtship?
(Jean) – The same anniversary as Obama’s presidency (General laughter).
(Chidi) – Okay, that’s it. Same anniversary as Obama.
What was the first thing you said to her that day?
(Chidi) – Hmmm! What was the first that I said? (Chidi asks her again).
(Jean) – You said nothing! (General laughter).
(Chidi)
Because I walked in, accompanied by a guest, you know. And there were
loads of people, so there were lots of hellos in between. People who
were my friends; some people who recognized me. There was a lot of
chit-chatting and then somewhere in-between, she was just there. The
first thing I said? Maybe I said nothing really (Laughs). Maybe I was
just dazed.
What didn’t you know about her that you are just finding out?

What didn’t you know about him that you found out after you became close?
(Jean)
– I did not know he was this popular. Unfortunately, at that time I
didn’t watch Nigerian movies, so I didn’t know about him. The only
question I asked him that day was, ‘You just walked in here and
everybody in the room was saying hello, do you know all these people?’
And he said no. And I said, ‘So, how come they know you?’ He said well,
by virtue of what I do. ‘I said what is it that you do?’ He said Nollywood.
And my next question was what is
that? (Laughs). He started laughing. Everyone else in the room was
laughing too, so I had to now go look at what is Nollywood. All of this
publicity, and the fans, his crown, his level of accomplishments in
Nollywood, at first, I didn’t know. I didn’t expect it. I saw it as a
nuisance initially, but I guess with time I will get used to it.
(Jean) – So, how do you intend to cope with the women, the fans and everybody trying to get a piece of him?
Well, you always have to give to Ceaser what belongs to Ceaser and give to God what belongs
to God. I realised that with Chidi’s line of work, his fans are always
going to be there. He will always have to have friends and fans. And
the Chidi that I met was simply Chidi. I didn’t meet GQ, the Nollywood
actor (Laughter). So, that aspect of him is a new discovery. The person
that I met was simply Chidi. So, that’s the part of him that I will
keep and I will let everyone else keep the GQ.
What do you like most about Chidi?
(Jean) – He’s very humble.
(Jean) – I’m yet to find out (General laughter).
(Chidi) – What do I like most about her? She takes all my breath away.
(Chidi) – What don’t I like about her? Hmmm! Too early not to be liking anything.
What are your dreams for this union?
(Chidi)
– I mean, this has been a long time coming. So, it’s a new terrain. We
are hoping to discover and re-discover ourselves and even new things
as we go along. The Bible has said that he who finds a wife finds a good thing. We are hoping to put that to test and see if that’s actually true.
So, it’s a whole new world,
discovery ahead that we are looking forward to. And since I haven’t
been here before, you know, I can’t say oh, this is what, what, what
I’m expecting now. I’m just open to the experience; open to the
journey.
Why did it take you so long to settle down?
(Chidi) – Okay! Maybe this is why (Pointing to his wife). Maybe she is why (Laughing). It took just looking at her to figure out what I’ve been waiting for.
What’s going to change about you now that you are finally settling down?
(Chidi)
– Okay, what’s gonna change about me? My personality doesn’t change.
I’m who I am. I am also sure that part of the attraction for her is my
personality. So, that is not gonna change. But the titles on the
invites will definitely change. Where you used to have Mr. GQ, simply
Mr. G.Q, you now have Mr & Mrs Chidi Mokeme.
Are you going to relocate to Nigeria or he will be the one to relocate to America?
(Jean)
– I sincerely want to be with Chidi. Of course, we will both decide
that. It’s not an overnight decision. We have to harmonize things.
We know a lot about Chidi already, can you tell us a little about you?
(Jean) – My full name is Jean Chinwe Anumba. I was born in the U.S, I spent a little bit of time in Nigeria, from age 4 to 15, of which I have a very short
memory. After which I went back to U.S and I’ve been involved
academically. I came out with a doctorate degree in Medicine and a
doctorate in Pharmacy… (That makes her a doctor-doctor, Chidi
interjects).
It’s
been a long endeavor. I love fashion, music. Basically, it’s a
combination of style with education for me and I come from a very humble
family…
How many are you in your family and what’s your position?
(Jean) –
We are a whole lot. Six kids, and I’m the fifth. I am the bridge
between my parents and my siblings. My father’s name is Augustine and
my mother’s name Agnes. Actually, right now, they are here in Nigeria
for the wedding. My father has
retired to Nigeria pretty much; he spends more time in Nigeria to do
what he loves to do best – agriculture. He has always loved that lifestyle.
What kind of family are you looking at? The one filled with children or maybe one or two?
(Jean)
– You know, one thing is that you can have dreams of how many kids you
want, but it’s ultimately not your decision. So, our decision: listen
my dear, we are praying for twins.
(Chidi) – Well, I concur. If she wants twins, we’ll pray for twins.
(Jean) – But ultimately, I’m simply praying for healthy boys and girls.
SOURCE 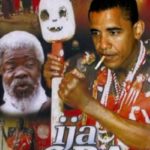