A
vigilant housewife, Justina Ogunsakin, has helped the Osun State Police
Command recover a Toyota Camry snatched from her husband at gunpoint. The car had been snatched on March 21 along Airport Road, Apapa, Lagos State.
Ogunsakin was travelling
back to Lagos from Ado-Ekiti, on May 23 when she spotted the car at a
mechanic workshop in Erinmo-Ijesa. Ogunsakin, who was in a commercial vehicle, immediately alighted and went to the workshop posing as a potential customer.
When she enquired about
the car, whose colour had not been changed from the operator of the
workshop, Lasisi Abu, he said it was abandoned at his workshop. Subsequently, Ogunsakin went to Erinmo-Ijesa Police Station, where she lodged a complaint.
The Commissioner of
Police in the state, Mrs. Kalafite Adeyemi, confirmed the incident on
Monday at the police headquarters in Osogbo.
She also corroborated
Abu’s claim that the car was abandoned at his workshop, saying he had
hitherto reported to the police that a Toyota Camry had been abandoned
at his workshop.
Adeyemi, however, said
upon Ogunsakin’s complaint, the police arrested a suspect, Mr. Ahmed
Muideen, who said the vehicle was bought from one Musa for N600,000,
along Ikorodu Road, Lagos.
Muideen said an initial deposit of N450, 000 was paid with a promise to pay the remaining N150, 000.
The police commissioner
said the suspect said Musa gave him the vehicle’s licence, road
worthiness and photocopies of customs duties.
She said investigation was ongoing in the matter, adding that the suspect would soon be arraigned in
court. 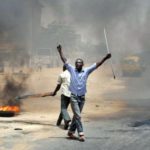