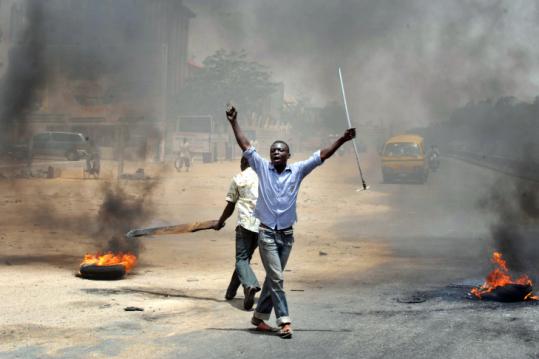 Nigerian Muslims took to the streets in the northern city of Kaduna on
Tuesday (today), firing AK-47s, burning tires and destroying at least one
church, two days after rioting by Christian youths killed 52 people,
witnesses said.

Multiple gunshots were heard
across the city where at least 52 people were killed on Sunday in
retaliatory violence after suspected Islamist suicide bombings of three
churches in Kaduna state that killed 19 Christians.


Religiously
mixed Kaduna is near the volatile “Middle Belt”, where the mostly
Christian south and largely Muslim north meet and the city has sometimes
been a sectarian flashpoint.
“They
are out on the streets, burning tires and shooting. They burned a
church,” said a witness, who only gave his first name, Suleiman, for
fear of reprisals.

It was not
immediately clear if the shots were fired into the air or at people or
other targets. There was no word on casualties.
Hundreds
of kilometers away in the northeast city of Damaturu, residents
reported gunfire and explosions through the night. The Yobe state
government imposed a 24-hour curfew as the military fought with gunmen.

The
protests in Kaduna followed attacks on Sunday by angry Christian youths
who set up roadblocks, dragged Muslims from their vehicles and killed
them, according to witnesses.
Kaduna’s government re-imposed a 24-hour curfew across the state, less than a day after relaxing restrictions.

The violence
has stoked fears of a wider sectarian conflict in Nigeria, an OPEC
member and Africa’s top oil producer that is home to the world’s largest
equal mix of Christians and Muslims.

Islamist
sect Boko Haram, which is waging an insurgency against President
Jonathan’s government, has claimed deadly attacks on churches in the
past, including on the previous two Sundays.

The
church bombings seem calculated to trigger wider sectarian strife. Boko
Haram’s leader, Abubakar Shekau, has said, in al Qaeda-style Internet
videos, that the attacks on Christians were revenge for the killing of
Muslims.

Such attacks have in the
past usually failed to spark sustained conflict in a nation whose
Muslims and Christians mostly co-exist peacefully, despite periodic
flare-ups of sectarian violence since independence from Britain in 1960.

The
majority of Boko Haram’s violence takes place in its home base in the
remote northeast but its attacks have spread across the north and to the
capital Abuja in the last year.