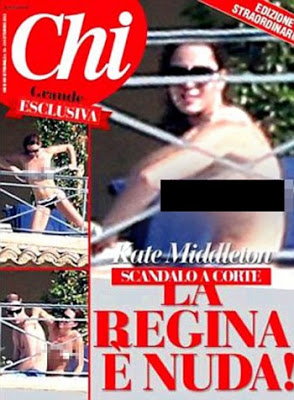 An Italian magazine Chi today published more topless photos of Kate Middleton, Chi has around 200 images of Middleton sunbathing naked. The Chi cover, featuring three pictures of a topless princess, was unveiled under the headline “Court Scandal: The Queen is Nude!”. Chi spread ran the whole sequence of photos as the couple sunbathed on a terrace, including one shot of the princess putting sun cream on her backside that didn’t appear in Closer. The glossy Italian magazine Chi published a 26-page special edition featuring 50 intimate photos of the Duchess of Cambridge taken while she was recently on vacation with Prince William in France.

Alfonso Signorini, the editor of Chi, has tweeted that “not even a direct call from the Queen” would stop him from publishing the pictures.  Signorini, 48, posted the message online after being posed the question by one of his followers on Twitter.

“These pictures are not offensive or in poor taste, they are not morbid and they do not damage the dignity of anyone. Instead the pictures that were published in Britain of  Prince Harry were exactly that – if I didn’t recognise the journalistic value of what I had, then if I did not publish them I would be better off in a market selling artichokes.  “These pictures were taken while the couple were on a terrace and they were taken from a public place, so there is no suggestion of an invasion of privacy,” he added. 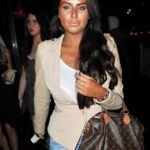