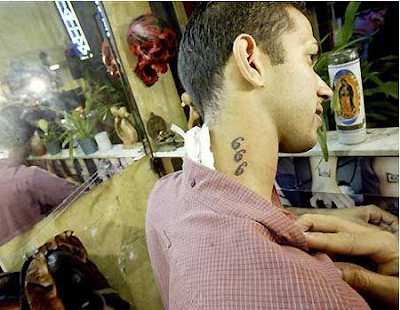 Members of of the controversial religious sect headquartered in Doral,
said they were following the example of their leader, Jose Luis De Jesus
Miranda, who has claimed to be Jesus and recently declared himself the
Antichrist. Critics have called De Jesus a cult leader who manipulates followers.
Church members say he has brought them happiness and spiritual
fulfillment.

It’s a sign most Christians would shun, because for centuries the
numbers have been associated with Satan. But for the 30 or so church
members who branded themselves with 666 and SSS — the initials of De
Jesus’ motto, “salvo siempre salvo,” or “saved always saved” — it’s a
mark of their absolute faith in De Jesus….Hmmm end time is near oooooo, continue reading.

Church members say the symbol doesn’t connect them to Satan but rather
to De Jesus’ claim that he has replaced Christ’s teachings with a new
gospel.

Scholars and critics of the movement say the tattoos offer frightening
evidence of the influence De Jesus commands over his followers.

De Jesus –who preaches that sin and the devil were destroyed when Jesus
died on the cross and that God’s chosen already have been saved — has
built a massive movement around his claim to divinity. Followers call
him “Daddy” and “God” and lavish him with $5,000 Rolexes and sometimes
40 percent or more of their salaries.

De Jesus had just a few hundred followers when he launched his church in
a Hialeah warehouse about 20 years ago. Today, he commands a global
movement from his Doral headquarters that boasts 335 education centers,
200 pastors, 287 radio programs and a 24-hour Spanish-language TV
network that’s available to 2 million homes — including by special
request from some U.S. cable companies. Only De Jesus and his right hand
man, Carlos Cestero, are authorized to preach.

In his sermons, De Jesus emphasizes wealth and success as a sign of
God’s favor. Many of his members are business owners who give a
percentage of their corporate profits to De Jesus, said Alvaro
Albarracin, who runs the film production company MiamiLa Entertainment,
said he gave 20 percent of his profit to the movement when he sold his
Web-hosting company, Dialtone, for more than $16 million in 2001.

“For all of those people who pray for us to come out of this movement,
this shows that this is it, there’s no going back,”one of the members
Roca said of her tattoos. “This is to make sure that everyone relates me
to that vision.”

“Antichrist” is the latest in a string of titles De Jesus has bestowed on himself.

In 1988, De Jesus announced he was the reincarnation of the Apostle
Paul. In 1999, he dubbed himself “the Other,” a spiritual super being
who would pave the way for Christ’s second coming. In 2004, he
proclaimed himself to be Jesus Christ. That claim caused some prominent
members to defect from the movement — including De Jesus’ first wife,
Nydia, and his son Jose Luis Jr., who started his own church in Puerto
Rico.

In January, during a packed worship service at the church, De Jesus took
off his coat and revealed the numbers 666 on his forearm.

“This is a congregation of Antichrists,”

The number 666 appears in the Book of Revelation, a portion of the New
Testament that details the prophet John’s apocalyptic vision of the rise
of the Antichrist, the tribulation and Christ’s return. In Revelation, a
horned beast appears on earth and requires everyone to get his mark —
666 — on the right hand or forehead.

Experts on new religious movements say De Jesus’ opposition to other
religions, and his claim to be the only legitimate spiritual authority,
resemble the teachings of some cults.

De Jesus’ followers have lashed out against organized Christianity
because they believe their prophet holds the true gospel, they say. His
adherents have disrupted Catholic processions on Good Friday and
protested outside an evangelical church gathering in Miami’s Tropical
Park. Last July, they tore up literature published by the Jehovah’s
Witnesses and other Christian movements during a march in downtown
Miami. 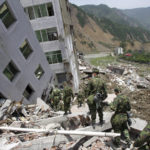