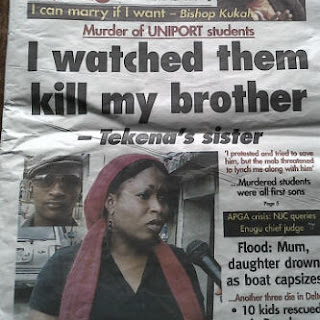 A sister of one of the four University of Port Harcourt (UNIPORT) students brutally murdered last Friday in Umuokiri village, Aluu, Rivers State, has narrated how her younger brother and his friends were lynched.

Miss Ibisobia Elkanah, elder sister of Tekena Friday Elkanah, revealed yesterday that policemen visited the scene where the students were burnt to death after they were severely injured and that one of the law enforcement agents told the perpetrators of the dastardly act “to burn them alive”….continue reading

The murdered students, Chiadika Lordson, Ugonna Kelechi Obusor, Mike Lloyd Toku, and Tekena Elkanah, all part two students, were murdered in cold blood over alleged theft of a laptop computer and a blackberry phone. Ibisobia, a part-time final year student of Marketing, at the same university who witnessed the incident, said on that fateful day, at about 7.30 am, she was at the house of her girl friend in the community when she heard people shouting outside. “I dashed out and beckoned on my friend to come since she lived in the area.

The thing attracted much noise and attention. I went there but did not actually see or recognize any of them, due to the crowd. “I heard when people were saying the people they (vigilance group) caught were strangers; that they want to burn them.

They said they were asking them questions, so that they could know their senders.” She said after that, she went back to her friend’s house, but could not stay there. “I went back again. I went through the bush path so that I could see them properly. I started jumping to see if I could see them. I jumped again but saw nothing. I jumped the second time and I saw Tekena. Tekena happened to be my brother. “I told myself that I was not seeing well, this thing is a lie. I jumped the third time, I saw Lloyd (one of the victims). So, I started shouting.

From what I gathered, the first time I came, they said they were not known; that they were strangers. As I identified them, I started shouting. Ibisobia said she continued shouting that Tekena was her brother, saying that he came to her on Thursday in school and she gave him his school fees. “I told them that somebody should allow me to ask him what happened and what he came to do. He would confide in me. He was wailing and in a pool of blood.”

“Tekena has been my younger brother for many years. I saw them as they lay in the water naked with leaves covering their nakedness.” His elder sister said she struggled and entered the crowd. Somebody shouted “Who is that? What is she doing inside?” “People were pushing me and I started crying. He is my brother! He is not a thief! Somebody behind me said O’girl run for your life.

About two persons turned and asked, are you sure he is your brother, and said may be I was the person that sent him to go and steal.” Ibisobia replied them that how could she send him, that she did not look as such. ‘They said I should run for my life that I would be the next one, fifth person.” The young lady lamented that before she could get to her friend’s room to call her family members, she learnt that the mob had taken them to the burrow pit. “So, I went there again.

I called my family and they started coming. The police van came, went into the mob and they were talking to them (youths). The people kept quiet as police were making statements. “I heard them laughing. You know, they were happy. They kept quiet again. Police talked and they laughed again. The next was for me to see three policemen coming out of the mob, boarded their van. And, one of the said “burn them alive”. “I must confess, I was gripped with fear.

I had the intention to talk to the man that said they should be burnt alive. As soon as they (police) drove off, I saw the flames. I was thinking they burnt them after they had killed them. Later, I discovered that they were burnt while they were alive. 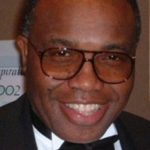 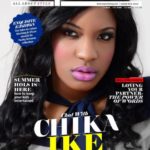