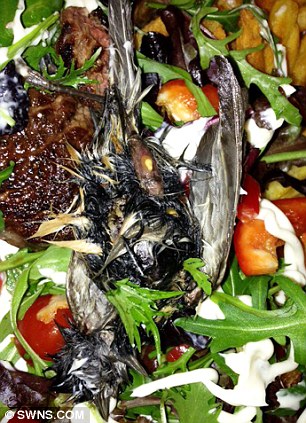 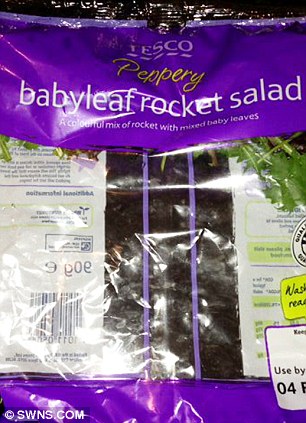 A shocked couple found a dead bird in their Tesco salad – after they had starte eating it.

James, 30, and Jasmine Watson, 32, of Yate, Gloucestershire, found the bird in a £1.50 bag of the supermarket’s Babyleaf Rocket Salad when they began eating in dimmed light. The five-inch bird, which Tesco later identified as a Blackcap European warbler, was inside the salad which Mrs Watson had ordered from the supermarket’s website three weeks ago on January 30.
The couple went into their local Tesco Extra store to complain – and a manager visited their home to remove the bird. The supermarket later apologised and offered a £200 gift card as compensation.
But sales director Mr Watson wants to know how the bird ended up in the salad. He said: ‘We could not believe it. We stood there, completely amazed, for at least two minutes.’….continue to see a close up shot of the salad.
He added: ‘We had the food delivery a couple of days before and then had gone out for a few drinks on the Friday evening. We came back and were preparing dinner in the kitchen.
‘My wife was cooking some scallops and steak and I prepared the salad. I opened the bag, tipped it into a salad bowl and cut up some other salad bits and put them on top. 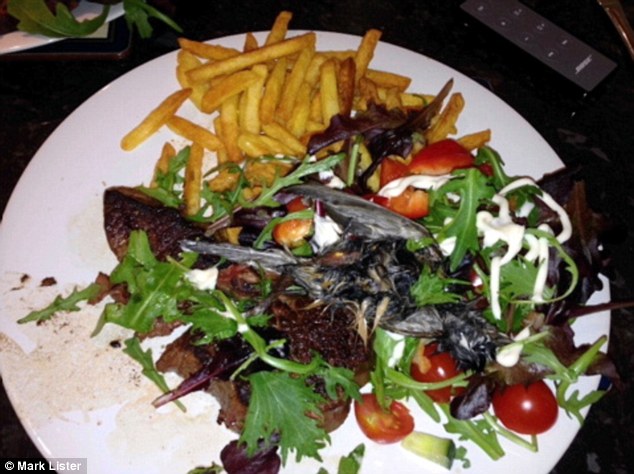 ‘Then I served the salad on some plates. We sat down at the breakfast bar and only had a few low lights on so we were effectively eating by candlelight.
‘I took three mouthfuls and then saw it. My first reaction was why have I got a soggy fishcake on my plate? But this was a full-size dead bird.’ Unable to contact Tesco’s customer services, the couple went to the local Tesco Extra store that evening.