Fragments of at least one meteorite fell in Satka, in the Chelyabinsk region of Russia, 900 miles east of Moscow and close to the Kazakhstan border, causing an explosion, left, and an arc of smoke to flash across the morning sky, above centre, at around 9:20am local time.
An estimated 500 people are believed to be injured and the impact severely damaged lots of buildings. Images of the meteorite were also captured and posted to YouTube. Early indications are that the shower is unrelated to Asteroid 2012 DA14, which is due to skim the orbit of the Earth later today. 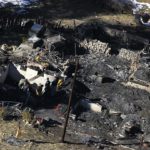