**This is good news! **
Nigeria and South Africa on Tuesday signed an agreement aimed at ending visa acquisition by holders of official and diplomatic passports.
Ministers from both countries have been charged to ensure the effective implementation of the newly signed instruments and the conclusion of outstanding agreements.
Both Presidents, Jacob Zuma and Goodluck Jonathan met in Cape Town, South Africa where various issues were discussed on how to improve on relationship between both countries as they agreed on so many issues aimed at boosting development in the continent.
Beside the visas waiver agreement both countries also signed eight other bilateral agreements which include, cooperation in legal field, oil and gas sectors, power sector development, environment,defence cooperation, women development and empowerment as well as child development.
The bilateral agreements also cover geology, mining, mineral processing and metallurgy and fields of information and communication technology.
For both presidents, stronger ties between both countries is necessary if the continent’s fortune is to be improved.
In his view, President Zuma said, ”we have a duty to take this historic relationship further. Our two countries have already grown very warm bilateral relations structured through the bi-national commission that was officially inaugurated in 1999,”.
The meeting also afforded President Zuma the opportunity to express his joy also the number of South African companies doing businesses in Nigeria, the biggest investment being in the telecommunication sector.
He further noted that it is the intention of South Africa to expand to other sectors such as engineering, construction, banking, oil and the media.
He also advocated for both countries to promote people to people relationship especially through tourism which he said has generated huge Foreign Direct Investment for the country.
“Last year alone, South Africa received a total of 73,282 Nigerian tourists which is an 13.8percent increase from 2011 contributing about 720million Rands to the South African economy within the period.”
In his responding, President Jonathan, described the signing of nine bilateral agreements between the two countries is a major achievement that would enhance the critical role of Nigeria and South Africa in transforming the continent,
The President later addressed joined session of the South African parliament where he re-echoed the need for the two countries to strengthen partnership in growing the continent’s economy. 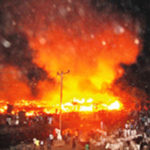