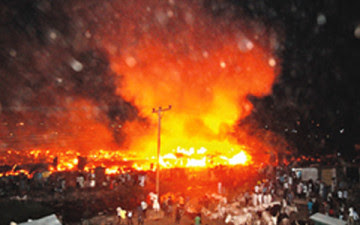 A family of six perished in an early morning inferno yesterday in Port Harcourt. Nobody could say what caused the fire but neighbors of the deceased family members told Sunday Vanguard that the fire started at about 2pm. According to the landlord of the house, located at number 17, New Estate Road, Railway Quarters,  they heard was a loud explosion. What followed next, he stated,  were balls of fire. The residents claimed they ran out of their apartments in the confusion, adding that the explosion came from the apartment of the deceased family members.

They said three boys, a girl and their parents were those consumed in the fire. They put the ages of the children at twenty two, seventeen, nine and seven years. According to a source, two other daughters of the deceased parents were not at home when the incident occurred. It was  gathered that the two other children relocated from home to write the ongoing West African  Senior School Certificate Examination, WASSCE. Neighbors said the father  was a taxi driver while the wife was a petty trader.

At press time, there was wailing in the compound. The landlord, who did not want his name in print, could not hold back tears, saying he wished  lives were not lost in the fire. “If the fire had only consumed the building leaving the lives, we would all have been consoled. But losing a family of six is a heavy loss”, he lamented. Rivers State Police Public Relations Officer, DSP Angela Agabe, who confirmed the incident, said she was still awaiting details. 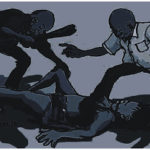