Menu
Almost every day, for 186 days, Charles Alasholuyi Kehinde has taken a photo of himself pleading with the world not to forget about the over 200 school girls abducted by Boko Haram from their school. 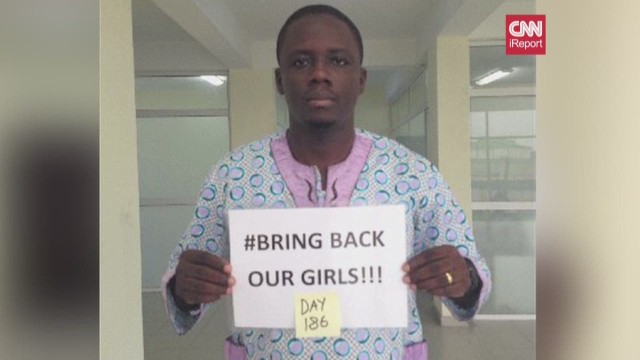 Six months after more than 200 schoolgirls vanished into the night in Chibok, Nigeria, the #BringBackOurGirls campaign has faded.
When the social media phenomenon of signs calling for the release of the missing girls took off in May, celebrities like first lady Michelle Obama and Nobel Prize recipient Malala Yousafzai posted their photos, joining people from around the world.
But as weeks became months and prospects of the schoolgirls’ release seemed slim, the social media campaign slowly dwindled.
But one man, Alasholuyi Kehinde, did not stop fighting to bring the missing girls home.
Almost every day, for 186 days, the Lagos, Nigeria, resident took a photo of himself holding up a sign pleading with the world not to forget about the Chibok schoolgirls. A father of three and marketing professional, Kehinde felt a responsibility to advocate for the missing girls and their families. He posted the images on CNN iReport each day.
Now, Nigeria has reached a ceasefire agreement with the Islamist terror group Boko Haram, which took credit for kidnapping the girls back in April. The girls are expected to be released shortly, although Nigerian government spokesman Doyin Okupe says “it is a process. … It is not a question of hours and days.”
With the end of the kidnapping ordeal in sight, Kehinde shares with CNN why he didn’t give up hope as the campaign faded.
CNN: When you first started taking photos, did you know you were going to take a photo every day?
Kehinde: I never knew I would still be carrying the Bring Back Our Girls placard six months after the schoolgirls were abducted. I had thought the girls would be back soon, especially when a couple of countries were pledging support to help rescue them. Day 20 was when I started taking photos, because it was so shocking and heartbreaking. Now we’re up to day 186, and the story is the same, the girls are still not back.
CNN: What inspired you to keep participating in the #BringBackOurGirls campaign?
Kehinde: I believe the Chibok parents whose children were abducted need our support during this agonizing time. I am a father of three kids. If I am away from my kids for two or three days, I always feel like there’s a vacuum. So, I felt like we must advocate for these parents. We must join our voices with theirs and demand for the safe return of their abducted children.
CNN: Did you tell others about what you were doing?
Kehinde: I did get awesome support from people all over the world through various social media platforms. They kept encouraging me to keep holding on, and to not give up when many others have since given up.
I am hopeful, and I believe that one day, the girls would be freed. This belief has never changed, not once.
CNN: How did the people in your community respond when the girls were first abducted?
Kehinde: Initially, there were some who didn’t believe such a thing could happen. Some people just couldn’t fathom more than 200 innocent schoolgirls being violently taken all at once. That was huge. It was unbelievable. The realization dawned on many when the government confirmed the abduction to be true.
CNN: Do you think people in your community still care?
Kehinde: The support for the parents of the abducted schoolgirls in my community is awesome. We are all united in our demand. We are asking and pleading with the Nigerian government to please do more to ensure the safe release of the abducted schoolgirls.
CNN: What are your thoughts about the government’s effort to get the girls back?
Kehinde: I believe the Nigerian government has been doing everything possible within its limit to ensure the girls are safely rescued. But I believe the government could do a lot more better than what it has been doing. Six months after the kidnappings, we are now hearing about negotiations for the release of the missing schoolgirls. But we have lost some valuable time in the process.
CNN: Is the community hopeful that the schoolgirls will be returned?
Kehinde: Everyone is anticipating, expectant and praying it is true. Some are waiting to pop champagne.
CNN: Do you think the girls will ever get rescued?
Kehinde: Fingers are crossed that hopefully the girls would be reunited with their families. I am hopeful, and I believe that one day, the girls would be freed. This belief has never changed, not once.

According to Charles, the man with him in the picture above, is the camera man behind all his daily pictures. He wrote this on his facebook page:

All the attention has been on me all day, moment CNN posted stories about my Daily Count Up on #BringBackOurGirls on their various social media platforms…

I wish to appreciate the guy who has been taking all the images I have been posting everyday for the past 167 Days…His name is Mr. Friday Jimoh – My Colleague at Work. Please help me appreciate him. Cheers

Watch a video of his daily pictures below: