God TV, one of the biggest Christian television networks in the world, is in complete disarray after its founder left his wife to move to South Africa with his girlfriend.

According to Wendy Alec, her husband Rory was seduced by a “Jezebel” jazz musician and had begun having an affair. Citing Satan, Wendy claimed that the woman stole her husband for ungodly reasons and the two have fled Israel (where God TV is based) to live on a farm in South Africa. For his part, Rory admits that he is now living with the woman but denies that she was sent by Satan.

The Alecs had co-founded the station together in 1995 and had since grown the network to the point where it was getting millions of viewers each week from across the world. Despite the international success, all was not well behind the scenes. According to Wendy, Satan was secretly working to destroy her marriage by putting her husband in a place that no man could resist temptation: the music studio.

“God knew before the beginning of time that we would face this time,” she said on a special edition of God TV programming. “The princes of hell designed a perfect strategy through that seductive Jezabel spirit.”

“It was a real strategic attack against his mind.”

In the Bible, the actual Jezabel was a princess who married Ahab. Using her womanly prowess, she convinced Ahab to stop worshiping the Abrahamic God and instead pray to pagan ones like Baal. Since then, the term has been applied to any woman who seduces men and gets between them and God. The “Jezabel” in this case, appears to be a young jazz musician that Rory had been collaborating with for an album. She too, apparently, had a divine interpretation to what was happening, and allegedly told Rory that she had heard “an audible voice from God that Rory was the man of her life.”

Meanwhile Rory sent a letter to his staff explaining his side of the story and formally apologizing to them for the “moral failure” that he had committed and announcing that he was no longer going to be associated with the network.

After 20 years of service, I have had a moral failure this year. For this reason, I am stepping down. Please forgive me for the disappointment I’ve caused, but I know your eyes are on Jesus who is the author and finisher of your faith and not on me, an imperfect man,” he said. “It is with a heavy heart that I confirm my season with GOD TV is over for now.

It’s unclear how the network will handle the abrupt change in leadership. According to Wendy Alec, the show must go on. And for now, the programming remains largely unchanged (God TV’s twitter account didn’t even mention the scandal). For the past few years the network has been heavily promoting a singular goal to reaching the cable boxes of one billion people across the world. 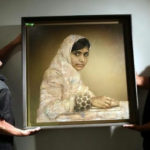