Menu
A man who could not sleep because of the noise from his neigbours anytime they have sex  have written a polite letter to them. The man has now been dubbed ‘the politest neighbour in the world’. 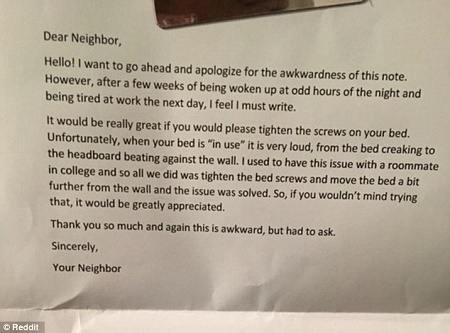 The unnamed man, believed to be from Atlanta, Georgia, has been praised for his ‘tasteful’ prose after he left the note on the couple’s door suggesting they ‘please tighten the screws on the bed’ and signing off ‘thank you so much.’

He posted it on Reddit three days ago, it has attracted hundreds of views and comments. The note reads:

‘Dear Neighbour, Hello! I want to go ahead and apologize for the awkwardness of this note.’

‘However, after a few weeks of being woken up at odd hours of the night and being tired and work the next day, I feel I must write.’

‘It would be really great if you would please tighten the screws on your bed.

Unfortunately when your bed is “in use” it is very loud, from the bed creaking to the headboard beating against the wall.’

More when you continue:…..

‘I used to have this issue with a roommate in college and so all we did was tighten the bed screws and move the bed a bit further from the wall and the issue was solved.’

‘So, if you wouldn’t mind trying that, it would be greatly appreciated.’

‘Thank you so much and again this is awkward, but had to ask.

‘Well this is a really tasteful letter. A lot of people would have taken the opportunity to be aggressive or passive aggressive. Sounds like an alright neighbor to have.’ 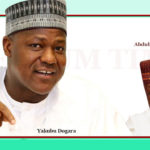 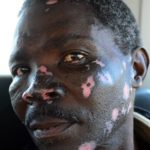