Connect with us
The Nigerian Army has said the Shooting Stars FC defender, Izu Joseph, who was killed on Sunday, reportedly by a stray bullet from a member of the Joint Task Force (JTF), was killed in a cultist’s shrine. 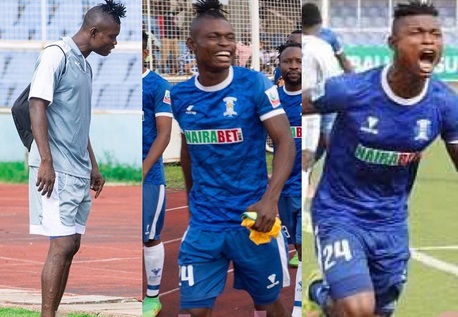 Nigerian Professional League club, Shooting Stars FC of Ibadan, announced that the club’s central defender, Izu Joseph was confirmed dead after he was hit by a stray bullet in Bayelsa State on Sunday.

In an interview with Daily Sun, the father of the slain Shooting Stars’ defender, Pa Joseph, revealed how his son was allegedly shot dead by security operatives who must have mistaken his son and his friends for members of a militant group at a jetty in Okaki Village, Ahoada West LGA of Rivers State where the player and four of his friends were shot dead.

“I learnt that my son pleaded with them and was asked to identify himself and despite doing so, he was shot together with his friends and the most painful thing was that they took his phone and recorded him while he was still writhing in pain till he was about to give up the ghost.”

Speaking on Tuesday, the Commander, 2 Brigade of the Nigerian Army, in Port Harcourt, Brig. Gen. Hamisu Hassan, has disclosed that the player who was killed on Sunday, reportedly by a stray bullet from a member of the Joint Task Force (JTF), was killed in a cultist’s shrine.

The Commander who revealed that investigation is ongoing to determine what Izu was doing at the shrine, described as shocking, the death of the footballer, adding that while it remains a ‘questionable mystery’ how the deceased was found in an isolated area very close to a shrine, the Command will stop at nothing to uncover the ‘ills’ behind his demise.

In a statement, Hassan said;

“Izu was killed when troops, who were on a confidence building patrol, moved into cultists’ hideout in Okaki village. Information available to the patrolling troops indicated the presence of suspected cultists in Okaki village.

“The troops moved in and raided the suspected criminal hideout. One person lost his life at the hideout while several others fled. Later, it was confirmed that the person who lost his life was a Nigerian footballer, identified as Mr. Izu Joseph.

“Nevertheless, investigation is ongoing to determine what he was doing at the cultist’s shrine at that time.”