Portuguese superstar Cristiano Ronaldo leads 11 other nominees for the UEFA Goal of the Season prize.

The prize only allows for one goal to be selected from each UEFA competition, which means Gareth Bale’s equally stunning overhead kick at last season’s Champions League final against Liverpool missed out.

Dimitri Payet’s brilliant solo effort against RB Leipzig was the Europa League nominee for the award.

Also on the shortlists are Goncalo Ramos, Paulo Estrela and Ricardinho as well as Tottenham and Danish playmaker, Christian Eriksen.

Mario Mandzukic won the award last year, while Lionel Messi won it in 2015 and 2016.

UEFA Goal of the Season nominees in full: 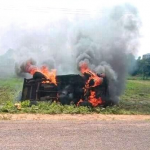