Mariam Nabatanzi, At the age of 12, was married off to a man 28 years her senior, after surviving an assassination attempt by her stepmother. At the age of 40, she’s known as Uganda’s most fertile woman after it was reported that she has given birth to 44 children.

In her home village of Kabimbiri, central Uganda, Mariam Nabatanzi is known as Nalongo Muzaala Bana (the twin mother that produces quadruplets) and that nickname is well-earned. In the 18 years that she spent being pregnant throughout her 40-year life, the woman has given birth to six sets of twins, four sets of triplets, three sets of quadruples, as well as a few single births. Out of the 44 children that she brought into this world, 38 are still alive today, most of them still living at the family home. Mariam is a single mother, and although providing for such a large family, she somehow manages to put enough food on the table for everyone.

Mariam’s life has never been easy. At age 12, she was married off to a man 28 years her senior, after surviving an assassination attempt by her stepmother. She claims that the woman put crushed glass in the food and managed to kill her four siblings. She only survived because she was away at the time, but her parents still managed to get rid of her, by marrying her off to a much older man who physically abused her whenever she said or did something he didn’t like.

“My husband was polygamous with many children from his past relationships who I had to take care of because their mothers were scattered all over,” Mariam told Uganda’s Daily Monitor newspaper. “He was also violent and would beat me at any opportunity he got even when I suggested an idea that he didn’t like.”

Nabatanzi gave birth to her first children, a set of twins, in 1994, at the young age of 13. Two years later, she had her first set of triplets, and nearly two years after that, she birthed quadruplets. While that may seem unusual to most people, Mariam didn’t find it strange at all, because she had seen it before. Her father had 45 children with several women, and she claims that they all came in sets of quintuplets, quadruples, twins, and triplets.

Dr. Charles Kiggundu, a gynecologist at Mulago Hospital, in Kampala, Uganda, told the Daily Monitor that the cause of Mariam’s extreme fertility is most likely genetic: “Her case is genetic predisposition to hyper-ovulate (releasing multiple eggs in one cycle), which significantly increases the chance of having multiples; it is always genetic.”

Mariam had always dreamed of having six children, but by her sixth pregnancy, she had already given birth to 18 babies, and she wanted to stop. She went to a hospital for help, but after running some tests, the gynecologist there told her that interfering with her fertility in any way would have put her life at risk.

“Having these unfertilized eggs accumulate poses not only a threat to destroy the reproductive system but can also make the woman lose their lives,” Dr. Ahmed Kikomeko from Kawempe General Hospital confirmed.

“I was advised to keep producing since putting this on hold would mean death. I tried using the Inter Uterine Device (IUD) but I got sick and vomited a lot, to the point of near death. I went into a coma for a month,” Mariam recalls.

By age 23, Mariam already had 25 children, so she went to the hospital again, but she was told that nothing could be done because her egg count was still very high. However, Dr. Kiggundu claims that there are procedures that can be carried out to prevent women from becoming pregnant, but adds that many of them just don’t know about them.

Mariam Nabatanzi’s fertility woes finally came to an end in December of 2016, after the birth of her last baby, as she claims the doctor told her that he had “cut my uterus from inside”. Dr. Kiggundu said this was most likely tubal ligation.

It’s hard to imagine a mother raising 38 children by herself, but Mariam somehow managed to do just that. Her husband is hardly ever around, and whenever he does come by, he sneaks in during the night and leaves before the kids have a chance to see him. 23-year-old Charles, the woman’s eldest son, told the Daily Monitor that he had last seen his father when he was only 13, and that some of his siblings have never even seen him.

“I can comfortably tell you that our siblings do not know what father looks like. I last saw him when I was 13 years old and only briefly in the night because he rushed off again,” Charles said.

Mariam’s husband only comes home about once every year, and when he does, he is always drunk and violent. He doesn’t provide for the family at all, so that burden is solely on her. The woman said that he wasn’t even around to name some of the children in person, doing it by phone instead.

“I carry these humiliations because my aunt advised me to always endure in marriage and have my children as the center of focus. She advised me not to produce children from different men,” the dedicated mother said.

In order to take care of her family, Mariam Nabatanzi will take any work available. She administers local herbs for various illnesses – which she says she has done since she was a young girl, but also takes casual jobs like plaiting hair and styling brides for weddings, as well as taking care of decorations for various events. She does anything she can to put food on the table for her children.

“Everything is solely from my pocket; I buy 10kg of maize flour a day, four kilograms of sugar a day and three bars of soap. I need to have Shs100, 000 at the least on a daily basis to have the family catered for. God has been good to me for they have never gone a day without a meal,” Mariam said.

After the Daily Monitor featured Mariam Nabatanzi’s story in April of last year, a crowdfunding campaign was set up for her on GoFundMe. It managed to raise $10,000 in just over a month. 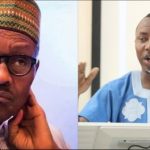 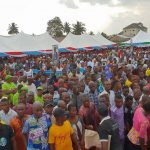