It was a bad-tragic Christmas day for a resident in Benin City after a fire incident claimed the life of a family of three living at No. 27, Mabel Street, off Etete Road, Benin City.

According to reports, a fire which started at about 2 am in the morning, consumed a family of three (husband, wife and their baby) and also destroyed the belongings of other tenants before help could reach them.

The landlord of the house, Mr. Egberamwen Nosakhare, said the fire started at 2 a.m. when he saw smoke billowing from one of the tenants’ room. He said:

“I forced the door opened and saw flames of fire from the gas cooker and there was nothing I could do. I was helpless and could not go in. The family died in the inferno.”

A neighbor, Okhuoghae Osawaru who describe the deceased man as humble and hard-working, said the affected family was inside the house when the fire started. He said:

“The man is a hard-working man. He just returned from outstation to celebrate Christmas with his wife and baby. He was humble and nice. It was a pity for it to happen on Christmas day.”

The name of the man was unknown at press time. 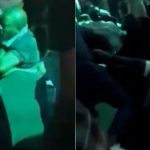 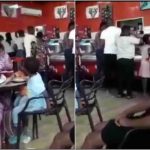