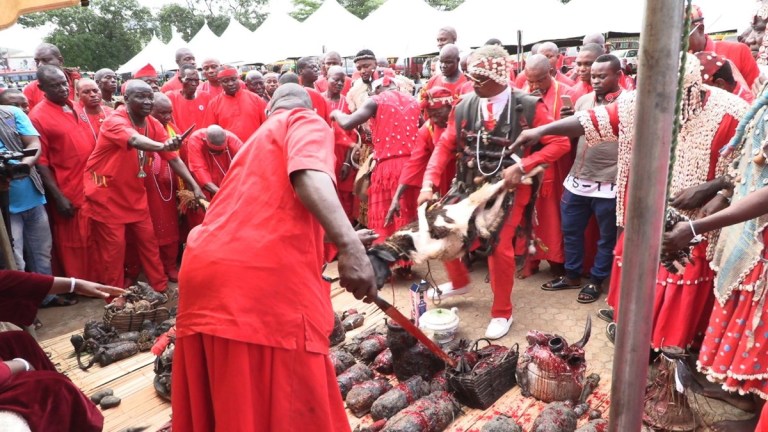 According to Vanguard, their mission was to invoke age-long traditional practice of cleansing the land and appeasing the gods following the upsurge in cases of killings occasioned by armed robbery, cultism, kidnapping, sacrilegious acts and the seeming inability of security agencies to stem the tide.

The different traditional worshippers, native doctors and priests in their hundreds besieged the ancient Urhokpota ground in red attires with different traditional instruments of war and unanimously heaped disastrous curses on those committing sacrilege in the land and throne of the kingdom.

According to the native doctors and traditional priests, the curses were also targeted at traditions’ violators, sponsors of cultism, kidnappings and other heinous crimes in the kingdom.

Shortly after the slaughtering of animals and offering of sacrificial materials to ancestors, the various groups took turns to pray and lay curses on those violating the law of the land.

The groups, thereafter, had a precession to strategic places in the town including Sokponba Road, Kings Square, Murtala Mohammed Way, Igbesamwan Street, Akpakpava Road and ended at Emotan Shrine on Oba Market Road. The exercise was presided by the Ewaise Group headed by Chief Eguezigbon and Chief Ohen-Egie of Ogbeson.