There was commotion early this morning after aggrieved women in Ogu town, Rivers state, prevented army personnel from gaining entrance into the local government Secretariat.

One of the soldiers tried to enter the premises by scaling the fence but was met with stiff resistance from the women who held him after accusing the military men of trying to manipulate the results of the governorship an House of Assembly elections.

Some of the women who stripped off their tops, can be heard shouting ‘we no go gree’ as they blocked the soldier and his colleagues from entering.

The soldiers scaled the Collation Centre fence to rob the result sheets
This is shameful @HQNigerianArmy #NigeriaDecides
pic.twitter.com/yNd6zfrgdP 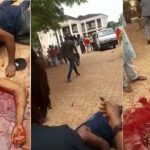 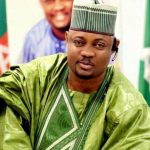