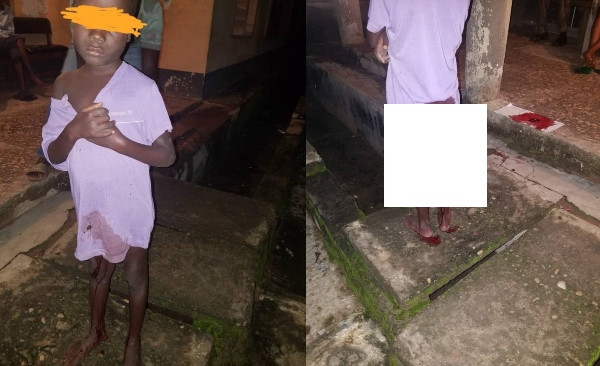 A Twitter user @YemieFash relayed the information he got on the platform after his phone conversation with the mother of the girl who said her daughter was sexually abused by a woman whose whereabouts is currently unknown.

When contacted, the mother of the little girl told ‘YemieFash’ that the incident happened at their neighborhood.

“I decided to go and call them home and on getting there, one of my children couldn’t stand up when i asked them to follow me. I asked her what happened and she said nothing happened, when we got home, she said she want to ease herself and when I looked closely, I saw blood all over her lower body. I called on neighbors to look at what I’ve seen and they asked if she had been raped, I told them I don’t know.”

When the woman asked her daughter what happened again, the girl revealed that the yet to be identified lady took her in, took off her pant and started using two fingers in the little girl’s vagina.

READ:  Mayor Of Peru Pretends To Be Dead In A Coffin To Avoid Arrest For Breaking Lockdown Rules

The mother stated that when she rushed back to the unidentified lady’s house, she only found the suspect younger sister who ran almost immediately after sighting the mother.

The young girl had since been rushed to the hospital for proper treatment.

At the time of filing this report, the Police has started an investigation into the incident after being accused of having cold feet on the case. He tweeted:

I have been able to reach the mother of the 8year old girl that was raped in Irele, Ondo State. She said her daughter was not raped as reported earlier, she said a lady forcefully penetrated her daughter with her hand. You can listen here. Cc: @SIAF_NG @citizen_gavel pic.twitter.com/PRbj7hYtoQ

According to her the lady who abused the child is still at large and the @PoliceNG have commenced investigation. We will be waiting for update from the @PoliceNG for other necessary actions as regards getting justice for the little girl. pic.twitter.com/L9wkkFrB9S