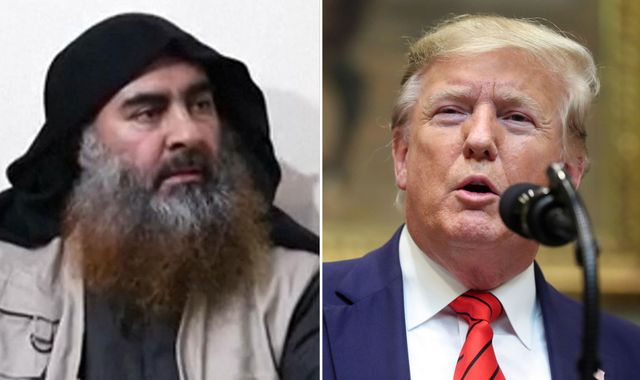 In a televised address on Sunday morning, President Trump said al-Baghdadi was killed and died “like a dog,” in a daring, nighttime raid by US special forces deep in northwest Syria.

According to Trump, the US forces also killed a “large number” of ISIS fighters during the raid which culminated in cornering al-Baghdadi in a tunnel, where he set off a suicide vest.

Trump offered a dramatic narration of the raid, which he said he was able to watch and took “approximately two hours.”

He gave a graphic account of al- Baghdadi whom he described as “a coward” being chased down a tunnel by American troops “whimpering and crying and screaming all the way. He was scared out of his mind.”

“He reached the end of the tunnel as our dogs chased him down,” Trump said of Baghdadi. “He ignited the vest, killing himself and three of his children. “He died like a dog.”

Al-Baghdadi’s body was badly mutilated but was positively identified on the spot by a DNA match, Trump said. “We had his DNA.”

Trump said the U.S. had been pursuing al-Baghdadi for years and described “capturing or killing” the leader as “the top national security priority of my administration.”

He said the intelligence that led to finding al-Baghdadi came together in recent months, and the operation had been planned for about two weeks.

The president mocked al-Baghdadi’s ISIS fighters as “losers” and said al-Baghdadi died in a state of “utter fear, total panic and dread.” He didn’t indicate how he knew what al-Baghdadi was thinking.

Trump warned other terrorist leaders could face a similar fate but stressed the unique importance of killing al-Baghdadi.

“We’re after these leaders, and we have others in sight, very bad ones, but this was the big one. This was the biggest one perhaps that we’ve ever captured,” Trump said.

As he stressed the importance of taking down al-Baghdadi, Trump suggested the ISIS leader’s death was even more significant than the 2011 U.S. operation that killed al-Qaida leader Osama bin Laden, who was the mastermind of the Sept. 11, 2001, attacks.

“This is a man who built a whole, as he would like to call it, a country … and was trying to do it again.”

Trump insisted Baghdadi’s demise had nothing to do with the US’s recent decision to pull out of northern Syria.