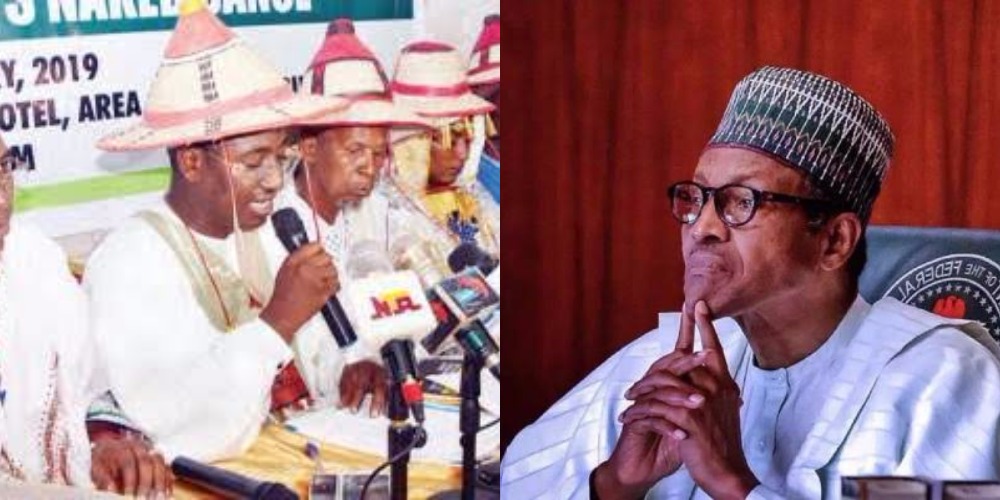 Fulani Herdsmen under the umbrella of the Miyetti Allah Kautal Hore, has called on the President Muhammadu Buhari-led government to arrest Yoruba leaders who are backing ‘Operation Amotekun’.

KanyiDaily had reported that Operation Amotekun is a security outfit which was recently launched by South-West governors to tackle insecurity in the region.

During an interview with The Sun on Friday, the National President of the group, Bello Abdullahi Bodejo the aim of setting up the security outfit was to ban Fulani herdsmen from Yorubaland.

Hence, Bodejo said FG should not just stop at banning the outfit but should arrest those involved in making decisions for its creation.

He said: “I read it on the internet. However, it would have been a good development, if the national security agencies – the Army, the Police, the DSS, the Civil Defence, etc, were not living up to expectations.

“Will Amotekun have more security intelligence than these national security organizations? The answer is no.

“Anything security should be left with those security organisations, so, I don’t know the reason for this one from the Southwest, except that it has sinister motive.

“Look at how the vigilantes are causing troubles all over; there is what is called interest in setting up this type of thing. Look at Zamfara where the vigilantes and the Fulani are having issues.

“They should not only ban it, but should arrest the leaders of this group. Like I said earlier, nobody or group has more security intelligence than the Police. The Army is doing enough; the DSS is also doing enough, likewise the Civil Defence.

“They are just doing all these things in order to stop the Fulani from coming into their area; it is just a hidden agenda to prevent the Fulani herdsmen from grazing in their God-given areas.

“If you say you set up Amotekun to protect your region, what about the Northern Nigeria, what about the Southeast and the South-South and other places that don’t have that kind of thing. Nigeria is one; everything is one, unless they want to divide the country.

“I support 100 percent the federal government banning it; and the leaders should be arrested. It is a deliberate plot against the Fulani.

“How many Fulani have been involved in crime and criminal activities in the area? Go and check, those people they have been parading as criminals are not Fulani; if they see a Fulani with his cattle inside the bush, they will be calling the Commissioner of Police, DPO, Area Commander and other personalities that they have caught a Fulani committing one crime or the other.

“The moment this is done, the herdsman is scared and he would be made to sell all his cows to free himself from that wicked accusation, that is why you see some of these people are jumping from here to here supporting illegalities and they have their aim.”

KanyiDaily had reported that the Attorney General of the Federation and Minister of Justice, Abubakar Malami (SAN) declared Amotekun illegal.