A man has been arrested by Yobe State Police Command for allegedly molesting and raping an 18-month-old baby in Karasuwa area of the state.

“During the week under review, Yobe State Police Command, through Karasuwa Divisional Police Headquarters succeeded in arresting one Ado Alhaji Kanwa who hails from Kazaure, Jigawa State but presently residing in Karasuwa LGA of Yobe State for peasant farming.

“The suspect was arrested after having molested and raped an 18-month-old baby girl, identified as Adama Mohammed in Karasuwa LGA.

“The Victim sustained various degrees of vaginal injuries as a result. Investigation has since begun for subsequent prosecution of the suspect.” 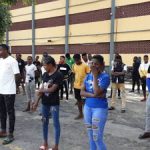