Imo State House of Assembly has reportedly lost its symbol of authority after its mace was allegedly declared missing. 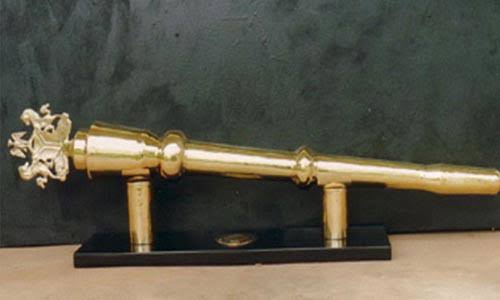 Reports emanating from some quarters indicates that the Assembly’s mace was allegedly used for the impeachment of the Speaker of Edo State House of Assembly and his deputy about a week ago.

Barely two weeks after the Imo Assembly went on break due to a lawmaker that tested positive for coronavirus, the symbol of authority is alleged to have gone missing.

However, the spokesman of the House, Dominic Ezerioha has described the rumour as false and a fabrication of evil discussants who want to destroy the image of the State Assembly.

Speaking during a press briefing on Tuesday, Ezerioha said the legislature’s mace did not travel to Edo. He added that the symbol of authority is intact and in sacred place for legislation.

“The news about the missing Imo Assembly mace is completely false. It is mere propaganda orchestrated by the enemies of the Speaker, Rt. Hon. Chiji Collins to water down his efforts over the years.

“As I speak, the symbol of authority is intact and in sacred place for legislature. The speaker of Imo state House of Assembly is in possession of a legal meaning of the mace belonging to the Assembly and until he ceases to be the Speaker of the House, the mace won’t be moved an inch from its sacred position.

“Anybody can wake up to talk nonsense. Imagine someone telling you that your mother is a woman when you already know she is. The news is false and a figment of some peoples’ imagination. The symbol of authority, I repeat is intact and in sacred place for legislature,” he added.

The mouthpiece of the House further said that the fabricators of the rumour will soon be unraveled and made to face the punishment.

KanyiDaily had reported how 17 Edo lawmakers impeached the Speaker of the Assembly, Frank Okiye and his deputy, Roland Asoro, during an emergency session held at the assembly complex in Benin.

During the impeachment crisis, some suspected thugs took down the roof of the building, before pulling down the iconic mace figure inside the Edo Assembly.