The Attorney-General of the Federation (AGF) and Minister of Justice, Abubakar Malami has reportedly paid millions of naira to social media influencers to launder his image and apparently save his job as Nigeria’s chief law officer. 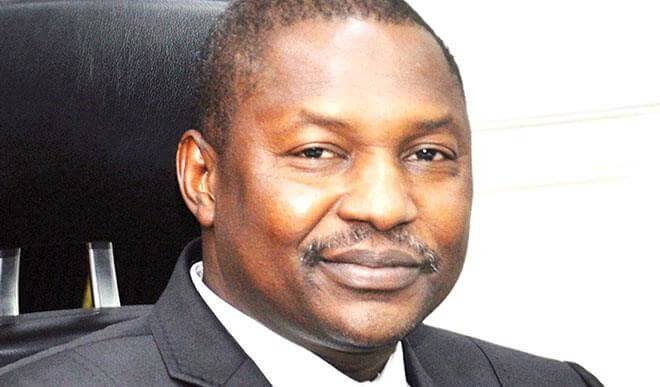 The media campaign for Malami is in response to series of detailed investigative reports published by SaharaReporters in recent times exposing his corruption-fuelled lifestyle.

SaharaReporters had revealed how the AGF had since assuming office in 2015 buying and constructing several properties across different parts of the country running into several billions of naira.

The properties include luxury mansions, hotels, a school, a multi-billion naira entertainment and event centre in Kebbi state on top of expensive automobiles including for his sons, who are known with no previous work or business history.

Unable to successfully orchestrate the arrest of Sahara Reporters Publisher, Omoyele Sowore, over the expository reports through the police, Malami resorted to releasing millions of naira to social media influencers to sing his praises and rub what they termed his “achievements” on the faces and noses of Nigerians.

On Twitter where the #AchievementsOfMalami was a major trend on Tuesday, paid influencers of different backgrounds were observed sharing various items with the photo and purported achievements of the AGF while in office since 2015.

Justifying the funds received for the hatchet job, many of the influencers on Twitter described Malami as the best Attorney-General and Minister of Justice in Nigeria’s history.

A user of the popular social networking platform with the handle @_jidedaboss said, “Fast forward to the Minister of Justice and Attorney-General of the Federation, Abubakar Malami’s contribution towards human rights policies initiation in Nigeria was tremendously impactful and surface transparency in the administration of justice. #AchievementsOfMalami.”

A female Twitter user, MIDE Woman technologist with the handle @Aramidee_sl while also sharing a post, said, “The Chief Law Officer of the country has been a great reformer of judicial system, particularly in this trying time of COVID-19 that all states are trying to protect the sanctity of human lives.

“Malami’s intervention into the kerfuffle of Omoyele Sowore and Sambo Dasuki’s cases is one that lent further credence to the fact that in promoting human rights and a strong rule of law, culture, he is second to none. #AchievementsOfMalami.”

ButterflyFairyGbemieButterfly with the handle @Reddishwine3, said, “Concerned about the human rights and state of inmates across centres of the country, Malami envisioned the dire need for general review and decongestion of prisons. #AchievementsOfMalami.”

Another user with the handle @Biig_John_ said, “I think Malami’s commitment to speedy trial and administration of justice in clover with his exertion to ensure a Nigeria where justice is discharged timeously is obvious. #AchievementsOfMalami.”

I think Malami’s commitment to speedy trial and administration of justice in clover with his exertion to ensure a Nigeria where justice is discharge timeously is obvious.
#AchievementsOfMalami pic.twitter.com/wGb8fmirHz

Uncle Precious with the handle @SamuelPresh posited that, “Nigeria’s Minister of Justice and Attorney-General of the Federation, Abubakar Malami, SAN, as the Chief Law Officer of the country has been a great reformer of judicial system. #AchievementsOfMalami.”

Weight Cold face with the handle @DeeTwoGd stated that, “Malami understood the need to restrategize the model as a legal ace in which the suspected cases of Boko Haram terrorists and other accused persons’ cases were handled until proven guilty. #AchievementsOfMalami.”

The image laundering appears to be beyond the social media space as some prominent citizens especially in the Northern part of the country have also been promoting Malami in different ways.

For instance, Alhaji Yakubu Ahmed-BK, a veteran journalist and social critic, while speaking with an online news medium said, “The Ministry of Justice under him (Malami) inaugurated a law review team which facilitated the review of existing laws on anti-corruption and transparency and accountability in governance. It was as a result of the review that new bills that addressed the limitations in existing anti-corruption laws were proposed.

“Kebbi needs a man like him, to change the narratives and concept of leadership and bring about the much needed development.”

In an opinion piece on Tuesday, public affairs commentator, Rabiu Musa, described Malami as a champion of Nigeria’s justice system.

He said, “Since his assumption of office on November 11 2015, and his subsequent reappointment as the AGF in President Buhari’s second term, Malami has not wavered in his commitment to the promotion and protection of human rights, thereby strengthening the nationhood and livelihood of the citizenry.”

But condemning the celebration of the so called “achievements” of the AGF by social media promoters, some Twitter users posited that indeed human rights abuses and disobedience of court orders had been the norm under Malami’s watch as chief law officer of Nigeria.

Leading the line in that regard, human rights lawyer, Tope Akinyode, said, “On 22nd July 2020, I obtained a Court Order mandating the @HQNigerianArmy & AGF @MalamiSan to grant Lance Corporal Martins access to his Lawyer & family.

“Till date, the AGF, a Senior Advocate of Nigeria & @HQNigerianArmy are yet to obey the Court Order #AchievementsOfMalami.”

On 22nd July 2020, I obtained a Court Order mandating the @HQNigerianArmy & AGF @MalamiSan to grant Lance Corporal Martins access to his Lawyer & family.

Till date, the AGF, a Senior Advocate of Nigeria & @HQNigerianArmy are yet to obey the Court Order #AchievementsOfMalami

A young activist, Ifemosu Michael Adewale, while reacting to the issue, said, “Hon minister of Injustice @Malamisan was part and parcel of the cabal that maliciously began a legal process to deny @IamMandate and @YeleSowore fundamental rights.

“He believes in impunity, he doesn’t believe in the rule of law, #RevolutionNow.”

A Twitter user, Towolawi Jamiu with the handle @jharmo while adding his voice to the matter said, “The @MBuhari regime under the most lawless and corrupt AGF @MalamiSan in the history of Nigeria holds the record for disobeying court orders in history (over 40 orders as at November 2019) of a democratic Nigeria. What a remarkable achievement.”

KanyiDaily recalls that the former acting chairman of the Economic and Financial Crimes Commission (EFCC) Ibrahim Magu had asked the Presidential Panel to investigate the alleged sale of recovered assets by AGF Malami.