Self-acclaimed African giant, Burna Boy has become the first Nigerian artiste to be nominated for the Grammy awards in two consecutive years.

In October 2020, the Recording Academy announced the renaming of the “Best World Music Album” to “Best Global Music Album.”

The 29-year-old Afrobeat singer has now bagged another Grammy nomination alongside other entertainers like Antibalas, Bebel Gilberto, Anoushka Shankar and Tianariwen.

Antibalas is an American afrobeat band modelled after Fela Kuti’s Africa 70 band while Bebel Gilberto is a popular Brazilian-American singer.

Anoushka Shankar is a British Indian sitar player and composer while Tianariwen is a group of northern Malian singers.

South-African comedian, Trevor Noah, will be host of the 63rd annual Grammy Awards which will be broadcasted by CBS from Los Angeles on Sunday, Jan. 31, 2021.

KanyiDaily had earlier reported that Burna Boy was also among the seven Nigerian music acts nominated in the 2020 Music of Black Origin awards, popularly known as MOBO Awards.

READ:  Skepta Reveals Why Having Wizkid On A Song Was More Important Than Drake [Video] 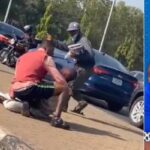