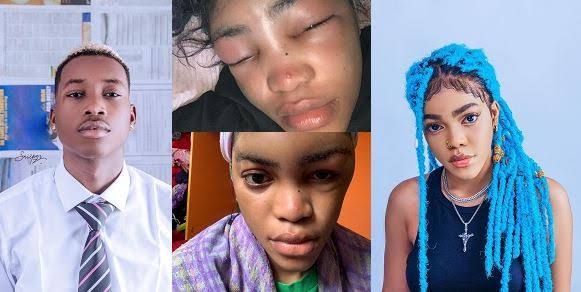 KanyiDaily recalls that some weeks ago, Lil Frosh was accused of beating Gift Camille to a pulp and threatning to release her naked videos which he recorded.

However, Lil Frosh on Monday debunked the claims while explaining his own side of the story during a recent interview with ionwannatalkpodcast.

According to the singer, he would never lay a finger on his girlfriend because he loves her so much. He also claimed that the swelling on her face was due to allergic reaction.

“I didn’t do it! I didn’t do it! She’s my girlfriend. She called me that she noticed that she was having a boil at the back of her ear. She said maybe it is an allergic reaction.

“She called me days later and said that thing is getting worse and I said what? She said the boil…she was sending me the photos day by day…it happened for seven days… I love her so much till now, I love her” he said.

KanyiDaily recalls that following the incident, Lil Frosh who was signed into DMW on September 24, 2020, had music contract terminated just 12 days later.

In a statement released on his Instagram page, Davido said his music label ‘DMW’ does not condone domestic violence, adding that Lil Frosh’s contract is terminated with immediate effect.

READ:  "They Are Scared Of Me” - Omah Lay Reveals Why His Colleagues Don’t Support Him