Former Governor of Ekiti State, Ayodele Fayose said that anyone who leaves the Peoples Democratic Party (PDP) for the All Progressives Congress (APC) is driven by greed and enviousness. 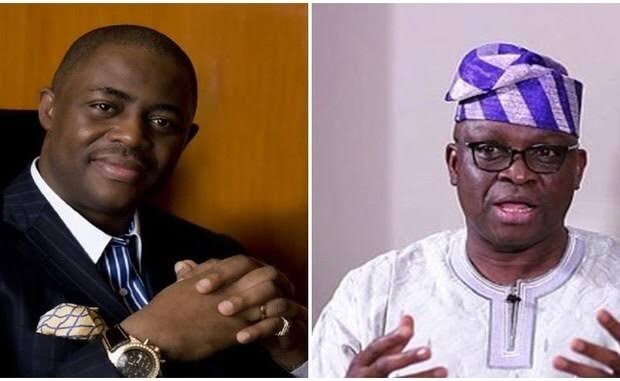 Fayose stated this on Channels TV on Sunday while reacting to the rumours of prominent PDP members leaving the party for the APC.

Making reference to the book of James one from verse four in the Bible, Fayose said anyone that leaves PDP for APC is taken away by covetousness.

When asked whether he can defect to the APC, Fayose said the ruling party cannot offer him anything, as his party gave him the opportunity to become governor when he was 42 years old.

“I’m over 60. What do I want to become? I was governor at 42. All the opportunities anybody could offer, PDP offered me,” Fayose said.

“I will not go to APC. What is missing? Some people choose to be dishonourable. Not me. I will rather go and be the husband of my wife, Feyisetan Fayose, and my son.”

READ:  My Only Prayer Is To Give Out Chunk Of My Wealth To Charity Like Bill Gates - Dangote

On the purported defection of Femi Fani-Kayode, a former minister of aviation, Fayose said that the rumours are not true as he has spoken to the former minister several times and confirmed that the he is going nowhere.

KanyiDaily reports that there have been strong indications that Fani-Kayode will return to the ruling APC, six years after he left for the PDP.

On Wednesday, Governor Bello announced that Fani-Kayode has joined the APC.

READ:  2023: Ken Nnamani Declares For Presidency, Says Nigeria Needs A Leader Like Him