Blogger and social media influencer, Japheth Omojuwa said President Muhammadu Buhari was expected to appoint a former Minister of Education, Oby Ezekwesili, as a member of his cabinet when he won the presidential election in 2015.

According to the blogger, Ezekwesili played some role during the 2015 electioneering because of the expectation that she would be made a minister in Buhari’s cabinet but the President did not appoint the ex-minister as a member of his cabinet when he assumed office.

Omojuwa, who said he has a 10-year relationship with the former minister beginning from 2012, stated this in a letter written by his lawyer, Boonyameen Lawal of Babalakin & Co Legal Practitioners.

The letter dated April 14, 2021 was titled, ‘Demand For Full Disclosure And Public Apology By Mrs Obiageli Ezekwesili In Respect Of Alpha Reach Ltd’.

Last week, Ezekwesili had threatened to sue Omojuwa for alleged impersonation after it came to the notice of the public that she was listed as a director in the blogger’s media firm, Alpha Reach.

The revelation was made in a report by a foreign medium, BuzzFeed, which had exposed the role Omojuwa and other influencers allegedly played in the social media campaign for the release of alleged fraudster, Alex Saab, a Colombian who has been declared wanted in the United States and is facing extradition charges in Cape Verde.

Documents circulating online show that Omojuwa’s company, which was registered with the Corporate Affairs Commission in 2012, has Kaduna State Governor, Nasir El-Rufai, and Ezekwesili as directors.

The company, Alpha Reach, is believed to have played an active role in the campaign #FreeAlexSaab.

But in the letter through his lawyer, Omojuwa said he sought Ezekwesili’s consent before he listed her as a director in his company.

The letter partly read, “Our client (Omojuwa) sought and obtained your client’s (Ezekwesili’s) consent before listing her as a Director of the company, based on their close relationship.”

The blogger said both El-Rufai and Ezekwesili were removed as directors of Alpha Reach Company in 2015 because it was sure that El-Rufai would become governor of Kaduna State and Ezekwesili would be appointed a minister in the regime of the President.

“It was not until 2015 when it was certain that HE Mallam El-Rufai was going to become the Governor of Kaduna State and the likelihood that your client (Ezekwesili) could be appointed a Minister by the then President-elect Muhammadu Buhari GCFR, that they were both removed as Directors of the company.

Omojuwa further said the ex-minister told him in 2012 to “pull in your brother(s), Chine and Chuba (Ezekwesili’s biological sons) into what you do from now on.”

The blogger described Ezekwesili as a benefactor who “took him under her wings and even assisted in paying part of his rent in Abuja in 2012”. He, however, said his relationship with the ex-minister deteriorated because he is no longer the “impressionable boy” who can be controlled to fight social media wars by proxy.

Omojuwa concluded the letter by stating that he would only make the documents requested by Ezekwesili available if she writes an undertaken that the documents would be treated with utmost confidentiality.

Pastor @obyezeks, you served me legal notice publicly, so I was left with no choice but to serve you publicly too. PS: I won’t react to the unwarranted provocation from you, your sons & allies. You betrayed my loyalty, service & respect to you, for reasons I don’t understand. xx pic.twitter.com/Hbj8Atmjn4 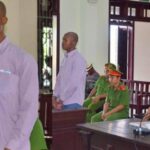