A group of armed robbers have stabbed a security guard after they invaded Dunamis Church In Abuja, FCT. 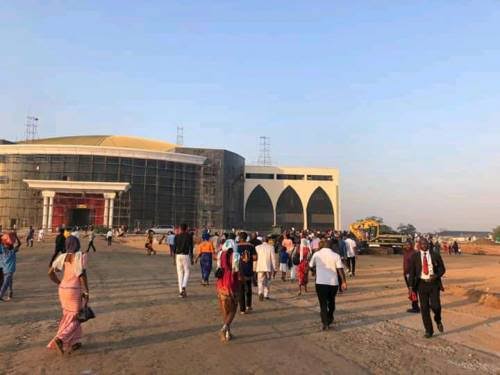 No fewer than 10 gunmen suspected to be armed robbers invaded the Dunamis International Gospel Centre in Kubwa, in the Bwari area council of Abuja, the Federal Capital Territory (FCT).

The gunmen were said to have stormed the Dunamis church on Monday from the shanties and slums in the neighbourhood.

It was gathered that the church security guard identified only as John, tried resisting them but the gunmen stabbed him in the stomach and ripped off his intestines.

According to Punch, a source said the gunmen, numbering over 10, were annoyed after they demanded money and searched the premises but couldn’t find anything.

He said, “The incident happened around 3am on Monday. The robbers came and John tried to resist them. During the fracas, he was overpowered and stabbed in the stomach.

“He was rushed to the General Hospital in Kubwa but because doctors were on strike, there was nothing that could be done. He was thereafter transferred to another private hospital in Abuja.”

The Chairman of the District Centre Estate, Ifeanyi Uwaje, confirmed the incident.

He said, “What happened was very unfortunate; we took the victim to a hospital and we have reported the case to the police.”

An Associate Pastor of the church, Joseph Ogaba, said nothing was stolen from the church.

He said, “Nothing was taken from the church and we cannot question somebody (guard) who is on the sickbed. Until he gets better and we hear from him, whatever you hear will be assumptions.

“We will prefer you wait to hear from the church before publication.”

KanyiDaily had also reported how gunmen have killed a worshipper and abducted three others during an attack at the Evangelical Church Winning All (ECWA) church in Kogi State.

READ:  Depressed Nigerian Soldier Commits Suicide By Shooting Himself In The Head In Borno